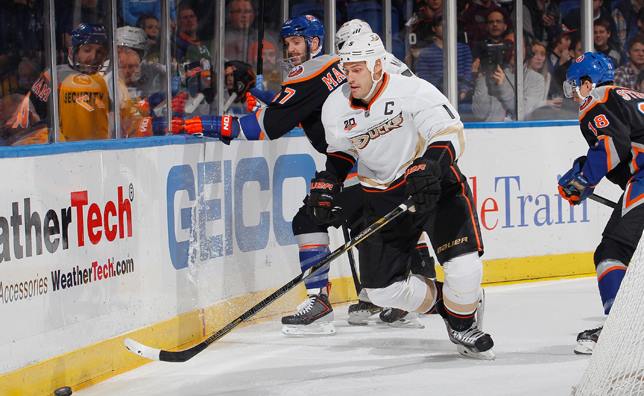 UNIONDALE, NY—The Ducks continue to make it look like the team no one can beat. In a somewhat easy victory, Ryan Getzlaf scored a hat trick with two in the third period to win 5-3 at Nassau Memorial Coliseum on Saturday.Anaheim set a new franchise record with eight consecutive victories.

Surprisingly, the Ducks weren’t the first to score as the Islanders were intent on gaining a second win since beating the Rangers Friday night. Thomas Vanek scored his 12th midway through the first period with a snap shot that came off the rebound from Kyle Okposo’s centering drive where Vanek put a stick up the net to go ahead early.

Getzlaf began his charge for victory shooting a backhander from the stick side of Evgeni Nabokov that went through traffic giving the captain his 17th.New York charged back late with a hard drive from Vanek scoring his second of the night unassisted. It gave Islanders center Frans Neilsen the tenacity to get on the board with his 12th of the season; he put his team up two goals in a chance to drop the best team in the league. The Ducks had an 18-14 lead on shots on goal, but the third period went completely against New York in what was a complete shock to everyone.

Getzlaf recorded his second of the night 1:10 into the third period with Corey Perry adding his second assist to the captain’s dominance that would come to a hilt later on. Center Mathieu Perreault scored on a shot that came in front of the crease to give him his seventh of the year. Palmieri added Anaheim’s third unanswered on a rush to the net off the faceoff for his sixth to take a 4-3 lead. The Ducks had given the Isles two chances in the period to take the lead, but the opportunity never came as they held New York to seven shots. Frederik Andersen’s solid defense gave little chance of a comeback.

Time continued to fall off the clock as fans began to the leave the arena knowing their team wouldn’t pull off an upset. It a desperate attempt with 51 seconds left in the game, Islanders coach Jack Capuano pulled Nabokov from the net setting Getzlaf for a milestone for himself and his team. On an empty netter, he skated easily to the net to record the hat trick.

The fall of New York in the third enraged Eric Boulton who was called for a game misconduct. The Ducks shattered the seven-game winning streak named by the “Mighty Ducks” during the 1999 season where they pulled off the feat at the start of the season. The Ducks could extend their streak and points lead from the Los Angeles Kings who sit three points back when they meet up with the Washington Capitals Monday night.