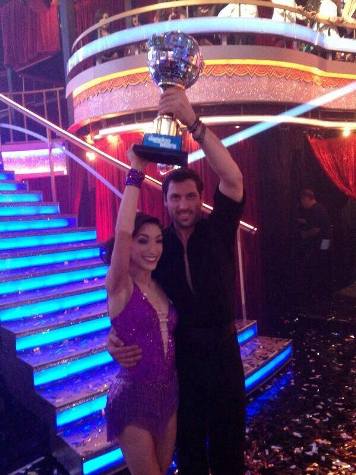 HOLLYWOOD-After the conclusion of season 18 of ABC’s Dancing With the Stars, many fans cheered after Olympic Ice Skater Meryl Davis and her professional ballroom dancer, bad boy Maksim Chmerkovskiy were crowned the winners. Although many fans enjoyed watching the finale from their TV screens, not many experienced everything that happened behind the scenes.

For starters, my twin brother among many other fans of the show, was fortunate enough to score tickets to the finale. Thankfully, he picked me to go with him! The line to attend the final show began at 10 a.m. on May 19. Around 2:00 p.m., staff began to hand out the tickets to enter the show, however, only a selected few were chosen to attend dress rehearsals.

Those who were allowed entry were then checked for weapons and asked to leave their cameras and phones behind, as they were not allowed inside. (Don’t worry we were given a ticket slip to get them back). Dress rehearsals gave people the chance to see the stars and their ballroom partners rehearse their dances, as well as the chance to meet the performing singers of the night.

During this exclusive chance, I along with fans got to meet Peta Murgatroyd, Witney Carson, Henry Byalikov, as well as the final three duos: Derek Hough and Amy Purdy, Candace Cameron Bure and Mark Ballas and my favorite Meryl Davis and Maksim Chmerkovskiy. Fans were also allowed to interact briefly with Iggy Azalea, but were allowed more time with Cody Simpson, Arianna Grande and the “DWTS” co-host Erin Andrews. We were also fortunate enough to experience Iggy’s performance (without the mic mishap).

Staffers then began numbering people and we were taken in by groups of 25 at a time. Once inside the dress rehearsal, the audience got to experience the awe of seeing the mirror ball trophy. Inside the room, fans caught glimpses of celebrities in attendance such as Roshon Fegan, Josh Barrowman and Lisa Rinna.

I got the opportunity to see the hosts, judges, and dancers as they were given touch-ups and we even saw how the crew worked through commercial breaks to put the stage together. Standing up and clapping was apart of the process as well. What people don’t know is that during commercial breaks, the audience was greeted by an audience entertainer who would ask questions and even give you a “DWTS” T-shirt for being an enthusiastic audience member.

Once the show ended, we were instructed to wait for the confetti to be cleaned up, asked to congratulate the new Mirror Ball winners, we were thanked for being fans, and then one by one asked to leave. So for next season, if you want to experience this opportunity be sure to snag yourself a ticket and watch for updates on who will compete on next season of “DWTS!”