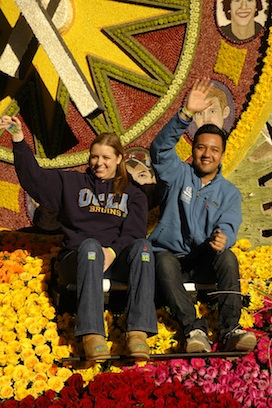 WESTWOOD—This was a special Rose Parade for Emily Fennell, a 26-year-old from Yuba City, California. Fennell, who has a daughter named Hannah, lost her right hand in a June car accident in 2006. Five years later on February 16, 2011, she was placed on the hand transplant list at UCLA Medical Center, where she was matched with a donor. Three weeks later, she became the first successful hand transplant recipient on the West Coast, courtesy of Dr. Kodi Azari’s transplant team at UCLA’s Ronald Regan Medical Center.

”¨Azari, who performed four other transplants in the United States before Fennell’s, says she “is exactly where I expected her to be after nine months.” In an interview with Canyon News, Azari reflected on both the extent of Funnell’s recovery and what the future holds for her. “She still has a long way to go,” Kodi admitted.

“Emily is doing very well with recognizing feelings and sensations in her right hand. She can tell hot from cold, and though it may not seem like much,” he explained, “it’s a huge step and she has exceeded my expectations.” Another major part of rehabilitation is the recovery of the fine muscles in the hand and dexterity. Nerves also must reconnect and relearn, in a sense, how to transmit signals.

What’s truly important is the success Fennell’s surgery means for medicine. “Emily represents a new area called reconstructive transplantation, surgeries than improve the quality of life for patients. It’s a new frontier that’s life enhancing,” he explains. “Ms. Fennell understands the responsibility that comes with being a pioneer,” he concluded.

“Witnessing Emily’s hand transplant was like watching a miracle take place,” Roxanne Moster, the Director of Health Sciences Media Relations at UCLA, told Canyon News. “Even though she is such a young woman, she showed tremendous focus, discipline and courage,” Moster continued. Funnell hasn’t taken the surgery lightly by any means. “Emily truly appreciates the gift her donor family gave during what must have been an extremely tragic and sensitive time for them, and her willingness to tell her story serves as a beacon of hope for other transplant hopefuls,” Moster added.

Twenty-eight organ recipients and their family members sat and waved from Donate Life’s floral red and gold float. “One More Day,” the float’s theme, portrayed clocks as a symbol of the “preciousness of time,” according to the float’s website, Donatelifefloat.org. Emily, among them, waves with both her right and left hand, during the 123rd Tournament of Roses.

The Worry You Cannot Escape