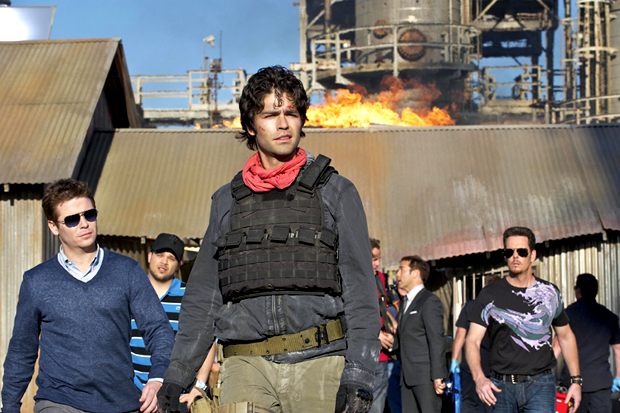 SANTA MONICA—“Entourage” returned with a bang, literally. The series, set in Hollywood, revolves around stars and star wannabes in Tinseltown, while basing the agent Ari, played by Jeremy Piven, possibly on a well known Hollywood agent we all know very well.

On Sunday night, the director of Vince’s (Adrian Grenier) latest action film talked his star into doing his own driving stunt, agitating both Eric (Kevin Connolly) and Ari (Jeremy Piven). Kevin Connolly and Jeremy Piven are sensational in the roles of Eric and Ari. Adrian Grenier is also superb.

Turtle’s (Jerry Ferrara) attraction to Alex (Dania Ramirez), an under-performing employee, threatened to damage his fledgling car-service business. Turtle, like most guys, can’t make a real decision about anything, especially when it involves beautiful women. Jerry plays a stereotypical Hollywood wannabe, who loses out because Turtle just can’t be decisive or put business before pleasure.

Ari looked to add to his resume as “the biggest agent in the world” by forging an alliance with the NFL. Worried that his holding deal is about to expire, Drama (Kevin Dillon) pressured Lloyd (Rex Lee), now his agent, to land him a project. You can’t have an exciting episode of “Entourage” without Drama. The name says it all. If the first episode is an indication of the rest of the season, it’s filled with excitement and lots of twists and turns. The episode was written and directed by Doug Ellin.