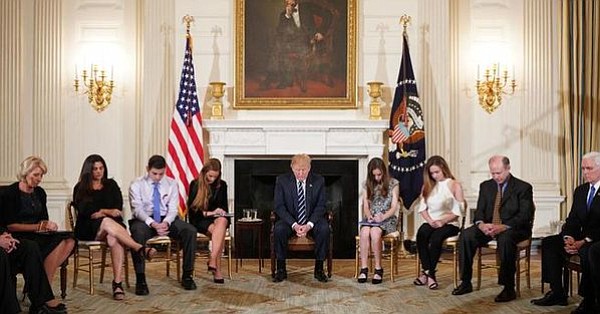 UNITED STATES—After the Parkland, Florida shooting, while mainstream media is pushing the protests and tossing blame at our current administration, President Trump is actively arranging back-to-back town hall meetings. He arranges to fly in victims, survivors and friends and families of the shooting to listen to their concerns. He’s ready to jump on it even though school shootings are at an all time low compared to Obama’s years.

Trump is mocked, ridiculed and attacked by the media when he was overheard asking someone, “What would you do about this?”

First news byte was “Can you believe Trump asked his friend on the golf course, what would you do to resolve the school shootings?”

Personally, I think that’s awesome. He is not so arrogant and closed minded like most past presidents. He wants to hear what people have to say before he jumps to sign in new law. He even moves to tighten gun laws, which previous Republican presidents would never have this type of non-partisan attitude like Trump does. He has nothing to lose because he doesn’t belong to any political party and he’s not about to sell his soul (unlike Hillary, Obama, Bush and the list goes on!).

Meanwhile you got communist-wanna-be, Bernie Sanders who tweets out a complete and utter lie:

“Maybe, just maybe, after 18 school shootings in America in just 43 days of 2018 the Congress might want to consider common-sense gun safety legislation and save innocent lives.” 1:58 PM – 14 Feb 2018.

Then you have people like David Hogg who are so quick to capitalize on the demise of his 17 classmates by using this tragic opportunity to become famous. He’s making the network rounds, appearing on CNN, Fox, MSNBC and others spewing out the same lie started by Bernie Sanders.

Google and YouTube has censored any footage that doesn’t fully support the 17 year-old opportunist,. They even went so far to publicly apologize to him for allowing videos to trend, which show him being coached on what to say on CNN. Yet, they are not censoring the lies that are being spewed and repeated.

Then, shock of all shocks, our own editor of Canyon News who is supposed to be about unbiased and fact-checking, spews out the same bogus lie on an article about to go to print… until I stopped it.

NEWSFLASH: It takes me, the one non-journalist here at Canyon News to tell you there were not 18 school shootings in 2018. There were 8, and that includes the ones that took place after school hours and just happened to be on a school campus.

Let’s look at the last 2 decades:

Now, you want to say that Trump has created so much hatred that gun violence has gone up. Tell me why his first year in office there were less shootings then any of the years of Obama’s last term in The White House.

In 2014, under the Obama administration there were 37 school shootings, but he failed to do anything to stop them and I didn’t see people protesting against him or the media attacking him. Yet, it’s alright to blame Trump. How so?

I’m sick and tired of fake news and people blindly pointing the finger at the wrong person. It’s all about groupthink and rubbish.

Let’s face it… President Trump is doing an amazing job and I am so glad he’s our president!