CALIFORNIA—On February 28, David Mora, 39, known as David Fidel Mora Rojas walked into Arden-Arcade non-denominational Church in the 2000 block of Wyda Way in Sacramento and shot and killed his three daughters, along with their chaperone before turning the gun on himself. 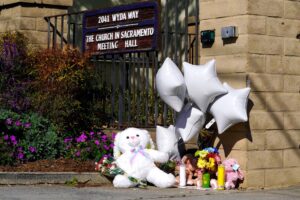 Natomas Unified School District (NUSD) reported on March 1, the loss of the three students. Counselors were on hand to help students cope with the tragedy.

Mora was under a restraining order at time of the shooting for domestic violence. He was not legally permitted to own a firearm. The weapon used is referred as a “ghost gun.” According to reports, it was an unregistered, homemade semi-automatic weapon that held 30 rounds of ammunition. Seventeen shots were fired during the shooting.

According to reports, Mora was committed to a mental health facility after threatening suicide in April 2021.

On February 22, while out on bail after allegedly speeding he drove off the road and into a field. He received a DUI charge in addition to charges of resisting arrest, battery on a police officer after he hit both a police officer and a hospital worker.

Church elder killed in mass shooting while trying to do good. Nathaniel Kong tried to help David Mora through his struggles, but Mora took out a rifle and killed Kong and his own three children. https://t.co/cEIsKi8B6m

Mora was residing at the Arden-Arcade non-denominational Christian Church when a judge allowed him supervised visitation periods with his children. The children’s mother, who was allegedly a victim of domestic violence, requested her visits be supervised by her friend, Nathaniel Kong. Kong was an elder in the church.

Mora is a citizen of Tijuana, Mexico.  Due to sanctuary laws, Immigration and Custom Enforcement agents are no longer notified when a person not a citizen of the U.S. is released from prison.

U.S. Immigration and Customs Enforcement spokeswoman Alethea Smock told The Associated Press that Mora was in the country illegally. He overstayed his visa after entering California from Mexico on December 17, 2018.