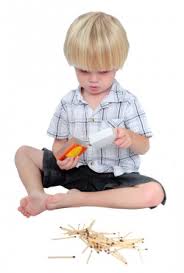 SANTA MONICA—On July 9, a massive structure fire occurred at 1609 S. Oak Street, according to the Los Angeles Fire Department.  It is believed that the flames started as a result of children playing with matches.

The fire was reported at around 1:20 p.m. in the Pico Union area, and occurred near the Santa Monica and Harbor freeways.  Arriving fire officials found the two-story four-plex being consumed by heavy flames. Firefighters executed an aggressive entry into the building using hoselines, while others climbed ladders to the tiled roof and performed vertical ventilation.  The crews were able to put out the flames in about a half hour and prevented further damage to nearby buildings.  No injuries were reported; however, six adults and four children were displaced and forced to seek temporary housing and disaster assistance, which they were provided by the American Red Cross.

1)  Store matches and lighters out of children’s reach and sight.

2)  Calmly and firmly explain to children that tools for lighting fires should only be used and handled by adults.

3)  Instruct toddlers to tell you when they find matches or lighters.

4)  Never use matches or lighters as a form of amusement for children, who may imitate your actions.

LAFD reports that the 88-year-old building is still being tabulated.  It is believed that a methamphetamine lab was also being operated in the building.