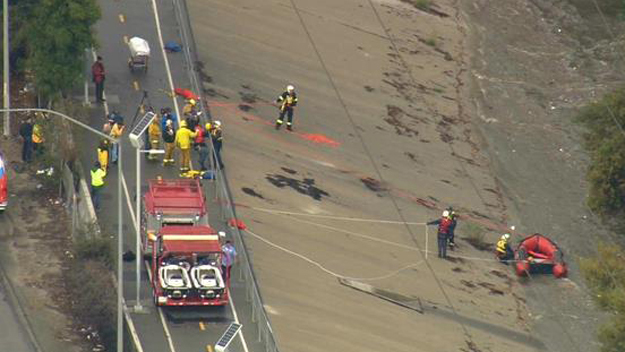 LOS FELIZ—Nearly 100 Los Angeles county firefighters rescued a man from the Los Angeles River on Thursday, January 5, after heavy rain flooded the area in the days before.

Authorities were called to the Los Angeles River near Fletcher Drive, next to the 5 freeway, where Silver Lake and Atwater Village meet at 11 a.m., according to Brian Humphrey of the Los Angeles Fire Department. KTLA was able to film the nearly hour long safety rescue via areal video Sky5.

Numerous firefighters and other rescuer personnel assisted with the rescue including the Swift Water Rescue team to save the 47-year-old man. The river’s speed was estimated at 10-12 mph.

The victim was stranded in the middle of the river, but stayed afloat by holding onto the vegetation surrounding him. Rescuers gave the man a helmet and a life vest. They were then able to place him into a raft, lifting him to safety. The Los Angeles Police Department reported the victim being stranded to the Los Angeles Fire Department.

There were no reports of any injuries sustained by the victim or officials.