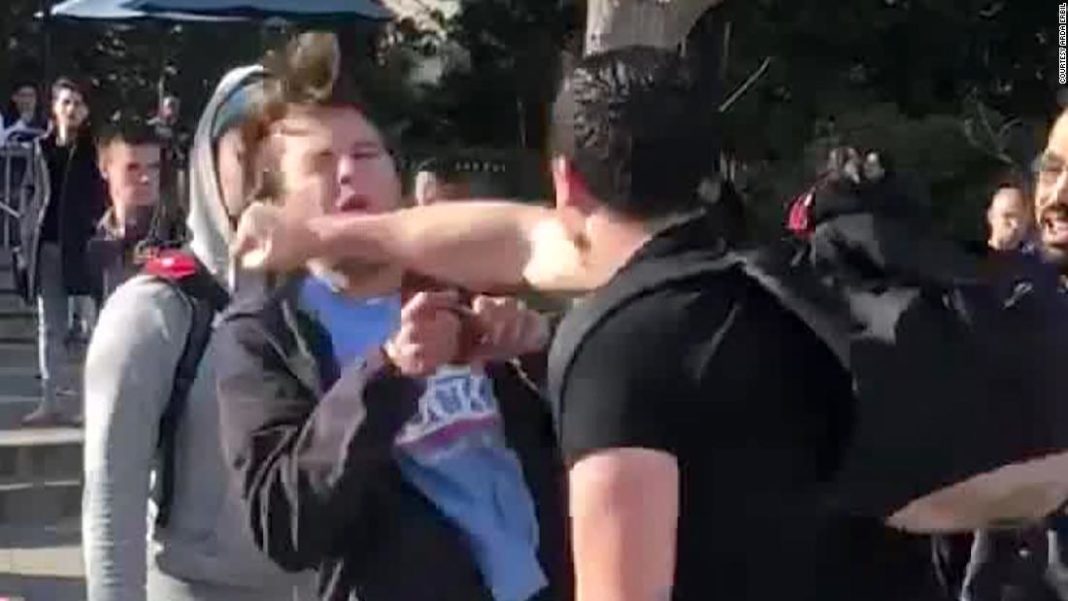 Williams, a vocal Trump supporter, was attacked on the University of California campus while recruiting for the conservative group, Turning Point USA. The incident was captured on cell phone video, quickly spread across the internet.

In the aftermath of Jussie Smollett’s “brutal assault” turned “staged hoax” fading from the news, Williams’ attack was minimally reported in mainstream media as being “punched.”

Smollett has since been arrested and charged with filing a false report.

Within minutes of Smollett reporting that he was brutally attacked by two white men wearing MAGA hats, the Chicago Police Department launched a massive investigation dispatching 12 detectives, officers and investigators to review hundreds of hours of video tape in the area.

The only lead investigators had to go on was a blurry image of two individuals walking away from the alleged crime scene which was heavily broadcast by every media outlet in the nation. Police labeled the individuals as “persons of interest.”

Within days they had located the whereabouts of the individuals through video surveillance footage, Uber and taxi cab records. Within two weeks CPD detained the persons of interest. Police stated they became suspicious of the legitimacy of the crime as details surfaced. The individuals were not white, nor Trump supporters and were allegedly paid $3,500 by Smollett to stage the attack.

Absent of evidence, collaboration and even injuries, the press continued to back Smollett’s story. Celebrities, politicians and news anchors were outspoken taking jabs at the Trump administration for the growing hate crimes. Actress Ellen Page blamed Vice President Mike Pence.

Presidential hopefuls, Kamala Harris and Corey Booker, both tweeted that this was a modern day lynching.

After evidence of Smollett’s alleged staged attack surfaced, the story dropped from mainstream media’s headlines. Celebrities unapologetically continued to use their platform to shame the Trump Administration, shifting their rhetoric that hate crimes are on the rise.

Williams’ attack was collaborated, witnessed by many, including faculty and staff at UCB, captured on tape and brutal. Continual coverage from Fox News along with public outcry on the internet kept the incident in the spotlight.

Donald Trump, Jr. tweeted, “Wonder if it would be the same if a conservative beat up a leftist on the Berkeley campus?” Conservatives took to social media to express their frustration with UCB and the police about why they didn’t find the suspect in spite of the clear images captured on the video footage.

“This person claimed we were promoting violence on campus and proceeded to take his aggression out on us,” Hayden Williams told Fox News pundit, Sean Hannity, in an interview on February 21.

Appearing on Hannity, Williams confirmed he has evidence and eyewitnesses confirming he did not provoke the attack.

Williams told Hannity that (Greenberg) took offense to a sign that read, “Hate crime hoaxes hurt real victims.” Bystanders reported that there was also a sign that read, “This is MAGA country.” His phone was knocked out of his hand. Another student recorded the entire incident.

Williams was recruiting on the UCB campus for Turning Point USA, a group that provides training for conservative groups.

UCB confirmed that Greenberg was an employee in 2010, working as a lab assistant in the Department of Psychology. It is unknown as to why he was on campus February 19.

Days after the assault, UCPD Berkeley sent out a request for more information condemning the violence on campus on Sproul Plaza earlier in the week.

“Let there be no mistake, we strongly condemn violence and harassment of any sort, for any reason. That sort of behavior is intolerable and has no place here. Our commitment to freedom of expression and belief is unwavering. At this point, we have no information indicating that the perpetrators are affiliated with the university, and I join our police department in urging anyone with information about the incident to come forward, so we can apprehend and bring the perpetrator to justice.

Greenberg is currently out on bail.