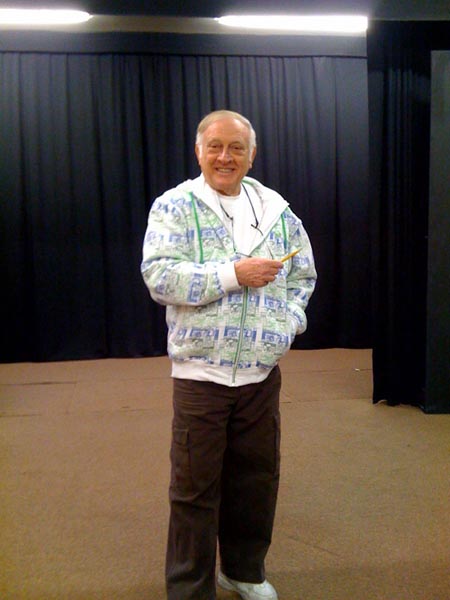 HOLLYWOOD —HELLO AMERICA! The name Gerald Gordon represents Tinseltown magic, no matter how you look at it.  I first became aware of his presence in 1964 when he signed me to appear in his Los Angeles production of “Finian’s Rainbow.” This man’s determination, boundless energy and passion for a creative commitment were overwhelming forces.  It affected all of us in the show, as if struck by lightning. Without exaggeration, the impact of his direction was felt by every actor, singer and dancer in the show.  Gerald made you feel as if you could accomplish anything, if only you believed, and he made us do just that.

It was soon obvious that Gordon was professionally adept and ready to handle any or every facet of direction and producing a major theatrical production. All one would have to do is review his eye-opening artistic background. Between 9 and 14 years of age, Gerald was a child prodigy on the piano. Later, he was urged to join a summer theatre group to star as a boy in a production of “Tomorrow the World.”  This whetted his passion for acting. He had lead performances with the likes of Zero Mostel, Estelle Winwood, Tallulah Bankhead, Sam Jaffe, Richard Deacon, Blanche Yurka and Erik Rhodes.

Eventually, his dedication to the arts became so intense, he founded his own theatre in Ithaca, N.Y., where he wore several hats of CEO, producer and director of the project. As a result, the Ithaca Youth Theatre, Inc. was born.

The amazing Mr. Gordon eventually attended Cornell University, and graduated with a B.A. degree. He was named president of the Cornell Dramatic Club, following in the footsteps of legendary actors Franchot Tone, Adolph Menjou and John Ireland. He directed the acclaimed musical hit “Brigadoon,” which was the first Broadway show produced by this drama organization, in the history at Cornell University.

Gerald Gordon’s arrival in Los Angeles was as if the town had been hit by an earthquake.  He immediately founded the famed Los Angeles Youth Theatre.  He produced and directed such shows as “Music Man,” “Finian’s Rainbow,” “Westside Story,” “Amahl,” “Night Visitors,” “The Nutcracker Suite Ballet,” “Stop the World I want to Get Off” and “Dark of the Moon.” The town couldn’t wait to hear what he might produce next; whatever he touched with his special magic, impacted every aspect of Hollywood life. His production of “The Fantasticks” ran for nearly five years and still holds the record for the longest running musical in the theatrical history of Los Angeles.

In 1965 Gerald was artistic director for the famed Hollywood Center Theatre.  He headed the organization for the next 14 years.  He took the town by storm with his productions that included “The Secret Life of Walter Mitty” starring “Citizen Kane” star Ruth Warrick.  In 1971, he directed a musical extravaganza for the United Crusades at the Los Angeles Music Center’s Ahmanson Theatre, starring Bob Hope, Janis Paige and Ralph Bellamy.  The UCLA Marching Band and 800 other performers took part in the massive production.

His versatility included being Artistic Director for the famed summer theatre  in Sacramento, Calif. for producers Lewis and Young’s Music Circus, directing such famous stars as Jan Peerce, John Raitt and Van Johnson to mention a few.  Later, in Santa Monica, Calif., he became Artistic Director for the ailing Mayfair Music Hall where he turned their productions of Old English Music Hall into some of the most successful theatre events in Los Angeles for the next few years.

Gerald Gordon’s entertainment history is enormous, one that is impressive by any industry standard.  No matter what the project is, i.e., comedy, drama, musical, or directing a film, when the man puts his own special magic to it, something wonderful happens. In 2006, his short film “Happily After Forever” won the best short dramatic film in the New York Film and Video Festival.

Working under the direction of Gerald Gordon was one of the highlights of my early career as an actor ”“ an experience that influenced my artistic attitude for excellence. Because of his faith in my talents, my career as a writer, director (NBC), Broadway, film and television performer was possible.  Thank you Mr. Gordon!