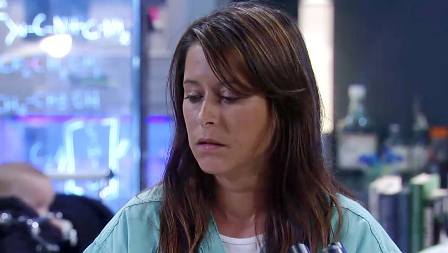 HOLLYWOOD—Well November sweeps, might be over, but that doesn’t mean the bombshells have stopped on your favorite soaps.  Well after nearly two years of waiting, the moment audiences have been waiting for have finally taken place on “General Hospital.”  Monday’s episode was a tearjerker as Robin (Kimberly McCullough) agonizingly watched as Patrick (Jason Thompson) and Sabrina (Teresa Castillo) tied the knot.  Audiences were likely screaming at the screen for Robin to halt the wedding, but she didn’t. The kicker moment came when the big announcement for the happy couple was about to be announced and little Emma spotted Robin from a distance.

She shouted her mommy’s name and jumped into her arms.  It was painfully difficult to watch, just as everyone in the church, especially Elizabeth (Rebecca Herbst), Sabrina and Patrick watched in awe.  We all know Sabrina’s world will come crashing down, but does this mean Patrick’s heart now returns to Robin? I’m not so sure about that, but with Carlos vying for Sabrina’s attention, things could get spicy. Robin will have to do a lot of explaining to her family about the melee, as will Britt and Nikolas for knowing of Robin’s survival and keeping it a secret for such a long time.

It was torture to see Sabrina grieve; it was more heartbreaking than the return of Robin from the grave, I mean come on we’ve seen this time and time again in the soap arena, just as someone prepares to tie the knot, someone from the dead returns.

“Days of Our Lives” amped up the drama this November with a wedding disaster unlike any other, but the surprise murder just in time for Thanksgiving was a bombshell not to be missed. When Nick attempted to violate Gabi, she reacted by clocking a rock over his head presuming to kill her former lover.  To make the situation complicated Kate (Lauren Koslow) and Sami (Alison Sweeney), formidable foes jumped in to help Gabi in the mess she’s created.  Neither were too fond of the vixen after she had made plans to leave Salem for a modeling gig in NYC that was before she discovered Nick set-up the entire ruse.

Just as the trio was about to dump his body into the raging current, he awoke! Yep, Nick wasn’t dead, but that didn’t stop the ladies from allowing his body to wander into the water.  This just seems too easy and I have a frightening feeling that Nick isn’t as ‘dead’ as Kate, Sami and Gabi suspect. Gabi is literally on the verge of cracking.  I mean she already got away with one grisly crime with the Salem gas explosion that killed two people, not to mention the horror should put Melanie through.  I’m wondering how Rafe will react when he hears the news. I don’t think he’ll be too happy with what transpires.

Vixen, Sami is already having nightmares about her involvement in the crime and it’s just a matter of time before her flame EJ (James Scott) discovers what she is up to, but will he have the power to protect his wife from the ‘dead.’ Not so sure, without there being a casualty or two along the way.

He’ll make a comeback from the dead and I have a feeling a loved Salemite Sami, Gabi or Kate will meet their demise; if not them someone that our suspects care dearly for. Heck, half of Salem has no idea that Nick is even missing, so imagine the chaos that ensues once the truth comes out.  Stayed tuned for the coming weeks as “General Hospital” and “Days of Our Lives” keeps the suspense coming!