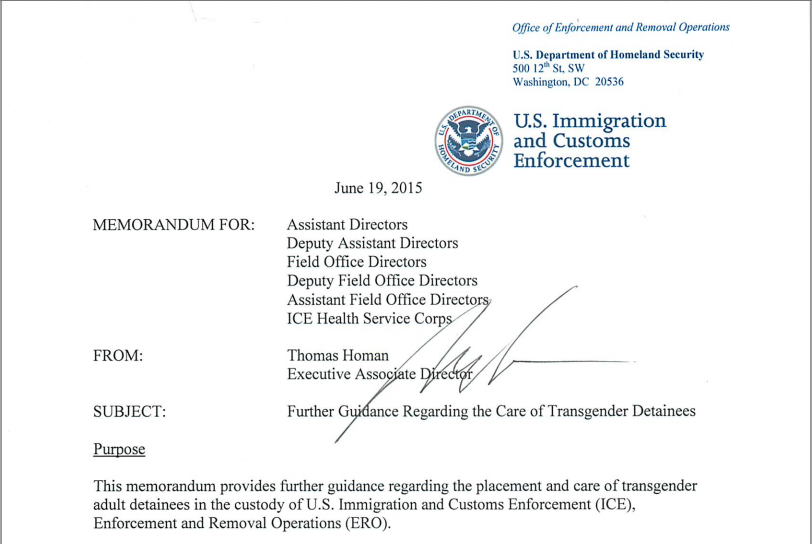 Transgender detainees will now be allowed placement into detention facilities that align with their gender identities, according to an official guide released Monday, June 29 by U.S. Immigration & Customs Enforcement (ICE).

The 18-page Transgender Care Memorandum also announced new ICE officer protocols, including “comprehensive officer training and tools will be provided to ensure an individual’s gender identity can be identified early in the custodial life cycle to ensure care in accordance with the new guidance.”

This change reflects the ICE’s new goal “to make sure our employees have the tools and resources available to learn more about how to interact with transgender individuals and ensure effective standards exist to house and care for them throughout the custody cycle,” according to ICE ERO Executive Assistant Director Thomas Homan. It is also a direct address of the concerns recently voiced by Gutiérrez, 35 U.S. Senators, and many members of the public that transgender detainees often face mistreatment, abuse and sexual assault at the hands of ICE employees.

Other key changes include the creation of a Transgender Classification and Care Committee in each detention center that will construct individualized “Detention Plans” for each transgender detainee. Some factors that these plans will take into account include the detainees’ prior medical/mental health records, medical or special needs, preferences and privacy requests, documented and self-reported history of sexual assault, victimization, or predatory behavior, and self-assessment of safety needs.

Although the new guidelines reflect a historic perceptual shift in the way transgender individuals are viewed and treated by the U.S. government, many people, like Gutiérrez, believe that more should be done.

“ICE, we don’t need guidelines.” Gutiérrez wrote on her Facebook page. “We need our freedom.”

The entire memorandum can be viewed below.

Tips On Progression Within Your Chosen Career