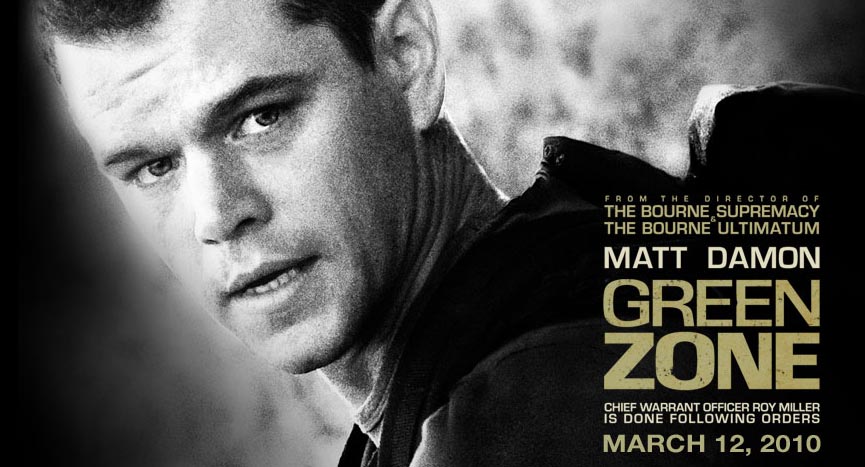 HOLLYWOOD—“Green Zone” is a film that will be released on Friday, March 12. It’s a film that prior to the Academy Awards on Sunday night, may have slipped through the minds of many movie goers. However, since the Oscar winning picture “The Hurt Locker” is fresh in American’s minds, “Green Zone” may end up being more popular with the public than originally planned. Director Paul Greengrass needs to be given credit for doing a film with substance that may or may not become popular with the public. The subject matter is obviously the war in Iraq. In the early 1940s leading up to our involvement in WW II, Hollywood made many films that showed Americans and the world the horrors of what Nazi Germany was doing throughout Europe and the world and it caused Americans to start caring about other parts of the world and the people who are in harm’s way.

“Green Zone” is not a film that will change anyone’s mind about the war and whether it was right or wrong to invade Iraq, but it will hopefully show movie viewers the tough job our troops have and what they are caught in the middle of very often. The following synopsis is what the studio states about the film: “Discovering covert and faulty intelligence causes a U.S. Army officer to go rogue as he hunts for Weapons of Mass Destruction in an unstable region.” This is a simple way of describing a film that is filled with substance. The film follows some of the bravest men and women in this war on terror with an honesty and integrity that gives respect to the soldiers in my opinion.

Matt Damon who I believe has become a great actor, not just a big star plays Miller in the film. He’s the heart and soul of this film, as he is in most of his projects. Critics probably won’t like the film, mainly because of its subject matter, but also because there is nothing sexy or flashy about it. There is just nothing sexy about war. It’s hell as a famous American general said during our very own civil war. What I loved about the film is that it cuts through the political story that may have caused us to enter the war or not. It doesn’t go into it at all, it goes directly on the ground to the war zone and we see what the lives of our heroes are often like. It’s a large cast, but Damon’s Miller is the centerpiece of the storyline and that suits it just fine.

It’s certainly not what you expect when you sat in your seat and try to figure out what is happening or will happen next. It’s not an epic like “Avatar” or a documentary. It’s truly a film in the vein of “The Hurt Locker” and it makes you pay attention to the people we often forget on a daily basis, but who are making a big difference in our lives whether we admit it or not. Yes, the filmmaker seems to have a jaded agenda or idea of the war in Iraq, and certainly the writers did. However, it’s a very unconventional film that I enjoyed just because it showed the sacrifices Americans and our allies make on a regular basis.

“Green Zone” gets Three and a half of Five Stars. It’s not a film for children.