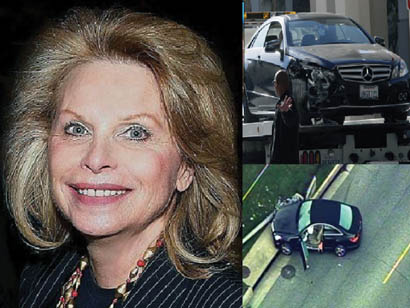 BEVERLY HILLS/HOLLYWOOD—On Wednesday, December 1, the man believed to be the suspect in the Ronni Chasen murder case killed himself in the lobby of a residential hotel that rents rooms by the month. Ronni Chasen, 64, was a famed publicist shot in her car after attending the premier for the movie “Burlesque.”

Undercover police arrived at Harvey Apartments in the 5600 block of Santa Monica Boulevard in order to contact the suspect, 43-year-old Harold Martin Smith. According to the Beverly Hills Police Department, when officers made contact, the man “pulled a gun and took his own life.” The suicide was witnessed by several fellow tenants who claim Smith shot himself in the head at around 6 p.m.

The Associated Press (AP) conducted crime scene interviews where resident Terri Gilpin said, “I thought it was backfire, but I was kind of half-asleep, in a drowsy state of mind.” She added that, “It was kind of like a pop.”  Gilpin claims that the suspect bragged about killing Chasen. “You know that lady on TV, that publicist? I did it, I did it,” Smith allegedly stated.  Neighbors claim that Smith was constantly talking about receiving a payment of $10,000 for the murder of Chasen.

Apparently, Smith had recently returned from serving two state prison sentences. He was out of prison on firearms and drug-related charges.  According to tenant Brandon Harrison, “He told me several times, ‘If it ever came back down to me going to prison, I would die first.’”  Harrison was interviewed by the Los Angeles Times.

The suicide took place in LAPD jurisdiction, but LAPD officials are deferring to their Beverly Hills counterparts in the investigation. Richard French, Senior LAPD media relations consultant, told Canyon News in a statement:

“The suicide was witnessed by Beverly Hills officers, and then LAPD was called in because it occurred within our jurisdiction at an apartment-like complex in Hollywood. As is customary in a case like this, there will be a cursory death investigation, and the County Coroner will determine the official cause of death. That’s the extent of our involvement, and Beverly Hills PD will continue to be the investigating law enforcement agency on the Chasen case.”

Chasen was last seen driving from The W Hotel in Hollywood on the early morning of Tuesday, November 16.  The forensic evidence indicated multiple gun wounds in the chest. Earlier Wednesday, a retired investigator who had seen the preliminary coroner’s report said that Chasen’s death appeared to be the work of a professional. In fact, from the time of the publicist’s death, friends and colleagues have speculated that her murder was a hit even though authorities are not disclosing possible motives.

Chasen had a long and prestigious career in the film business. She was originally from New York but moved to Los Angeles in the 1970s to begin her career as a publicist. Chasen was the senior vice president of worldwide publicity for MGM in 1993. Soon after, the famed publicist pioneered her own public relations firm based out of Beverly Hills: Chasen & Co.  She promoted a series of notable films, including, “Driving Ms. Daisy,” “Lolita,” “The Swan Princess,” and most recently campaigned for Michael Douglass for his role in “Wall Street: Money Never Sleeps.”