Stefanik is a 2006 graduate of the school and represents upstate New York’s 21st Congressional District. She was one of approximately 147 Republicans who opposed the certifying Joe Biden as President of the United States.

Stefanik called it a rite of passage and a badge of honor to be boycotted from a U.S. University.

“The decision by Harvard’s administration to cower and cave to the woke Left will continue to erode diversity of thought, public discourse, and ultimately the student experience,” Stefanik wrote in a statement. 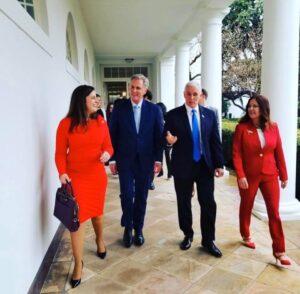 Stefanik was against the January 2020 impeachment of President Donald Trump. The former Chairman of the House Intelligence Committee would not hear Stefanik’s questions, saying her question(s) were not proper.

President Trump praised Stefanik on Twitter calling her a Republican star. She raised $11 million for her re-election campaign and has been re-elected for her fourth term.

“I am honored every day to represent New York’s 21st Congressional District and I believe it is my solemn and sacred duty to serve as their voice and their vote in the House of Representatives,” said Stefanik.

“Today, I will respectfully object to contested electors from the states of Georgia, Pennsylvania, Michigan, and Wisconsin. I do not take this action lightly. I am acting to protect our democratic process and the Constitution. Article II and the Twelfth Amendment of the Constitution make clear that I have an obligation to act on this matter if I believe there are serious questions with respect to the Presidential election”, Stefanik told Sun Community News.

Stefanik cited documented cases of voter fraud in Pennsylvania, Georgia, Wisconsin, and Michigan in her objection to certifying the 2020 Presidential Election results.