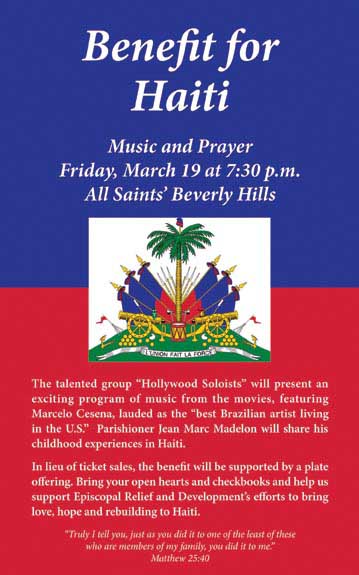 BEVERLY HILLS—With thousands dead and millions displaced, the earthquake that rocked the impoverished island of Haiti is one of the worst natural disasters in the Western Hemisphere in decades. And while immediate response to the crisis was great, millions remain homeless and hungry and long-term support is needed to both alleviate current humanitarian needs and help Haiti rebuild. Time is of the essence in one of the world’s poorest countries as the rainy season is fast approaching and with it more devastation and illness. All Saints’ Beverly Hills is responding to this incredible need by mounting its first Haitian Response

Event: HOLLYWOOD SOLOISTS FOR HAITI: From Studio to Stage ”“ Cinematic Musicians Come Out to Play on Friday, March 19, at 7:30 p.m. with proceeds benefiting Episcopal Relief and Development (ER-D).

As Rev. Gabri Ferrer noted on why All Saints’ Beverly Hills looked to develop an event:

“The hearts of this community, as well as the greater community of Beverly Hills were moved by the tragedy suffered in Haiti two months ago; a country that was already in such desperate straits. This evening will be a small but important token of the extended love for our brothers and sisters struggling half way around the world. As God reminds us, “we who are many, are one body…” And Interim Rector Mary Haddad adds, “as a church we are already connected to the people of Haiti through Episcopal Relief and Development. As ER-D so aptly express, help isn’t on the way, it’s already there – bringing in food, water, trucks and building clean water sites. In this benefit, our church joins them by raising funds and raising consciousness to help our brothers and sisters in Haiti.”

The spirit-led event will take place at All Saints’ Episcopal Church in Beverly Hills and features “Hollywood Soloists” ”“ an ensemble comprised of some of the industry’s top studio musicians led by Tom Boyd, solo oboist on more than 1300 soundtracks, and solo oboe for the upcoming Academy Awards â„¢, and Marcelo Cesena, film composer/solo pianist lauded as the “best Brazilian artist living in the U.S.” Additional members of Hollywood Soloists include solo bassist Waldir Burtapaglia, and Beverly Hills resident, solo cellist Amanda Zidow. The Soloists will present an exciting program of film music including well-known movie themes by John Williams, James Horner, Randy Newman, Lalo Schifrin and Ennio Morricone, as well as Piazolla and Brazilian classics. In addition, speakers from Haiti with first-hand understanding of the issues they face will discuss the effects of the earthquake on residents.

“It is thrilling to have such amazing talent come out in support of ER-D, which has deep roots in Haiti and is well placed to make a real difference. For us at All Saints’, this event continues our tradition of expressing our faith through action. For everyone in the larger community, it offers an opportunity to express solidarity with the people of Haiti in a tangible way,” notes Gary Roberts, parishioner and Chair of ASBH Mercy & Justice Outreach committee.

HOLLYWOOD SOLOISTS FOR HAITI is open to the entire community and free to attend. In lieu of ticked sales, the benefit will be supported by donations collected at the event with funds supporting Episcopal Relief and Development’s relief efforts in Haiti. ASHB Haiti Response Event

WHAT: EVENING OF MUSIC AND PRAYER FOR HAITI: “From Studio to Stage ”“

Cinematic Musicians come out to Play”

More information on ER-D can be found on their Web site: http://www.er-d.org/HaitiCrisis.

Additional information on All Saints’ Parish can be found on its Web site:http://www.allsaintsbh.org.

Businesses Are Closing Left And Right

The Definitive Guide To Online Casinos For Players From California

The 5 Best Casinos In Hollywood