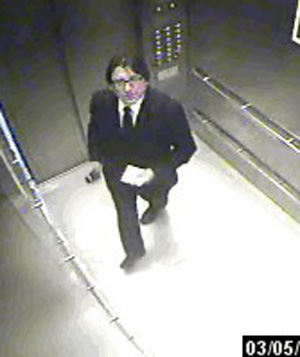 WILSHIRE—In an effort to catch a suspected thief, the Los Angeles Police Department has posted a picture of the burglar, and is asking for the public’s support in locating him.

According to the LAPD, on March 5, the unidentified man posed as an employee at a Four Seasons Hotel on 300 South Doheny Drive, which is also in the LAPD’s Wilshire area. The suspect allegedly walked in one of the guest rooms and stole an estimated $40,000 worth of jewelry from the unknown victim.

The LAPD said on their Blog site that in hopes to avoid similar incidents, detectives released the surveillance photo from the hotel to alert other nearby hotels of the suspect’s criminal activity, and to encourage them to take every precaution possible.

In the stilled photograph, the man was in an elevator. He was wearing dark-framed eye glasses and a dark-colored suit. The criminal also had an object in both of his hands.

While the investigation of the suspect and his crime is still in its preliminary stages, the LAPD is uncertain if the robber is linked to other thefts that occurred at several downtown hotels last year.

Anyone who has information regarding the unsolved case is urged to contact a LAPD Burglary Special Section detective at 212-486-6947. During non-business hours or on weekends, calls should be directed to 1-877-LAPD-24-7.  Anyone wishing to remain anonymous should call Crimestoppers at (800)-222-TIPS (800-222-8477).  Tipsters may also contact Crimestoppers by texting to phone numbers 274637 (C-R-I-M-E-S on most keypads) with a mobile telephone.  All text messages should begin with the letters “LAPD.”  Tipsters may also go to LAPDOnline.org, click on “webtips” and follow the prompt.