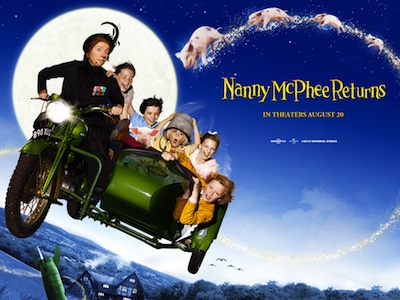 HOLLYWOOD—There’s nothing like a film with a great moral that is perfect for kids just before they head back to school. “Nanny McPhee Returns” is that film this summer. Susanna White directs the film that Emma Thompson starred in and wrote. Maggie Gyllenhaal and Ewan McGregor play characters we all want to love, and totally understand.

In this installment, Nanny McPhee arrives to help a harried young mother who is trying to run the family farm while her husband is away at war. Nanny McPhee uses her magic to teach the woman’s children and their two spoiled cousins five new lessons. The children, being what they are, don’t take her lessons too seriously at first, but by the middle of the film, they are all involved deeply in the plot.

Being from the country myself, I found the story very realistic. The city cousins arrive and refuse to leave. They preach to the country bumpkins about how to make things more fun and exciting, while totally missing out on the joys of rural living. Nanny McPhee, played brilliantly by Emma Thompson, is a breath of fresh air on the silver screen, and she has so many quirky reactions and gestures that you can’t believe the character is actually being played by a true Hollywood beauty.

Maggie Gyllenhaal is perfect as the mother Isabel Green, who seems almost exhausted by the time McPhee shows up. Gyllenhaal is one of the most diverse and talented actresses in the industry, and she comes through in this role. She wins me over, yet again, with a complex yet refreshing character. Maggie Smith as Mrs. Docherty is also sensational in the film, which is written well and directed perfectly.

Just about 109 minutes is just long enough for the kids to become wrapped up in the story, but then it’s all over and it’s time to leave. This comedy and fantasy film is fun and enlightening for young kids. I’m suggesting it for every parent who is about to send their child or children off to school in the coming weeks. It is also fun for the parents just like “Shrek.”