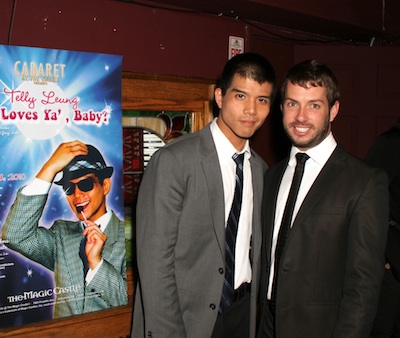 HOLLYWOOD—Joining the ranks of pitch perfect, velvet-toned voices like Torme, Sinatra and Cole is the name Leung. Directly from his appearance in “Rent” at the Hollywood Bowl, Telly Leung’s “Who Loves Ya Baby?” opened at the Cabaret at The Castle last week.

The young man of Chinese heritage explained the program’s title as a tribute to his namesake, his mother’s favorite actor, and Jennifer Aniston’s and my godfather, Telly Savalas of “Kojak” fame. Yes, images of tourists in the backseat of a San Francisco Taxi Cab in “Foul Play” with Goldie Hawn and Chevy Chase come to mind.

Leung gives not only an remarkable performance, but an intriguing and respectful nod to the family, whose plans for their son were geared more towards Harvard and Yale as opposed to Broadway, that supported him ”¦ in their own way.

He also credits their collection of LP’s for his love of music, from Cher to Liberace and Barry White to the Beatles, the later his mother discovered could often lull her baby boy to sleep. The multi-media engagements offered something to audiences of all tastes and styles. A generous dash of humor combined with Broadway, pop and non-traditional medleys showed Leung’s remarkable range.

Telly’s amazing voice and fabulous performance was enjoyed by many of Hollywood’s elite, from Kate Linder and Romi Dames to producer Matt Patton and TV and stage personality Wayne Brady. There wasn’t a bored person in the audience.