SANTA MONICA—The Bombay Frankie Company, a restaurant that features Indian burritos in Santa Monica, transitioned its business amid the COVID-19 pandemic and opened a new location in Culver City on Thursday, October 15. 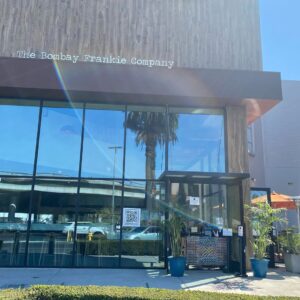 Hiram Mac, the owner of the restaurant, closed the Santa Monica’s location on October 4 since the landlord asked them to move out about a year ago.

The Santa Monica location was opened in his father’s gas station in 2017. “I think the whole idea of it being in a gas station really shocked people,” Mac told Canyon News.

“We saw Indian food hasn’t had its moments yet, especially in Los Angeles. We’re like let’s try to put our own creative spin on it. So, we injected a bit of California into it,” Mac added. 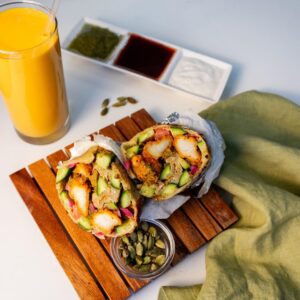 He noticed that burrito is a common menu item in California, and there is also a similar food in India called “Frankie,” so he decided to add his creativity to Indian style burritos and make the food portable and affordable to customers.

Mac said that the pandemic has drastically changed the way they operate the restaurant. But he also mentioned that their food is portable, and the restaurant was already equipped with delivery and takeout service, so the dining restrictions didn’t affect their business too much even though they cannot provide the dine-in service now.

“The most important thing to us is the safety and wellness and health of our staff,” said Mac. He also stressed that in order to enhance food safety and protect customers, he hired a general manager to make sure everyone follows CDC guidelines and increases the sanitation efforts. 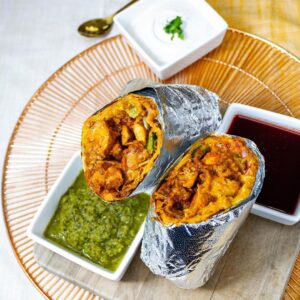 From selling Indian burrito in a gas station’s small kitchen to opening a restaurant located on the exterior of the mall, Mac emphasized, “we elevate the quality of our ingredients. We start to source different farms and different purveyors around the city. And like our spices, we start to grind our own spices, too.”

“People want to buy our hats, wear our t-shirts, represent us in different ways, tell their friends, and a lot of our business was the word of mouth,” Mac said he was surprised that the Bombay Frankie Company becomes a lifestyle brand to many customers. “I think that was the major reason for us to want to grow.”