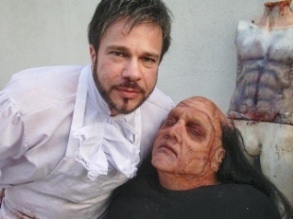 HOLLYWOOD—Within days a film crew plans to begin shooting in the canyons of Malibu and they will be marching across the hills to Beverly Hills, Bel Air and Hollywood Hills. In its wake there will be dead bodies of famous and beautiful people, lots of drug use and a shocking climax that will leave the public asking for more. By now you have heard that filmmaker Domi Arcangeli and director Kern Saxton are in town preparing to make the great vampire feature film of the decade, “Twilight of the Gods.” Arcangeli recently hired Stray Casting’s Sandra Moorman and Eric Ragan to choose the sexy, hot and exciting young actors who will portray major and supporting roles in the vampire flick. “We were excited to work with Domi again. He is a creative genius and this time Eric and I not only cast for Domi, but we also helped complete the script. We also wanted every actor whether lead or supporting to be perfect for each role,” said Moorman.

Domi Arcangeli is not only a famed executive producer, but an award-winning actor as well. So when this guy takes a shine to a young star’s career, it can only mean great things in the future. “In addition to working with Domi on this project, we had the wonderful opportunity to meet and work with one of Hollywood’s legends, Budd Moss, who represents our lead male character Charles. When we met Thomas Flannery, it was obvious to everyone in the room that we had found our Charles,” said casting director Ragan. Thomas Flannery, who is represented by Moss is excited about the part and tells Canyon News, “I had every intention when I moved to Hollywood two months ago to find a part just like this. But this role and the script are very exciting, and I’m glad to be a part of this project. I’m grateful to Budd [Moss] for helping me land this role.

When Stray Casting was asked to cast all roles in the film, the script was incomplete. Arcangeli, a masterful storyteller was not very happy with the script, but is now extremely happy with what Moorman and Ragan contributed to it. The creative teams of casting directors and writers have a vast and fascinating background. Moorman, who moved to Hollywood from Louisiana, is a retired military veteran, who survived five years in New Orleans and after award-winning work in the entertainment industry, she settled in Los Angeles. Ragan is a former chef from a very well-known Hollywood hotspot, who also was a photographer and writer. The creative energy between the two has culminated into casting genius. “When we saw Emma Fitzpatrick, we knew she was perfect for Claire, even though that’s not the role she auditioned for,” said Sandra. “But when you meet people and you feel an instant connection to a certain character, you have to go with it.”

Eric Ragan added, “Although we are casting and writing in this project. The most daunting task for me was the writing of the script. Casting was not as daunting for me.” While Sandra Moorman disagrees, “Casting was most daunting for me. But that’s why we work so well together, I guess. Opposites you see, Tommy! And we are excited about you being a part of the cast as well.” When the two finished writing the script, everyone was astonished by their level of storytelling skills. “Maybe it’ll mean more writing work for us in the future,” said Ragan.

The talented duo feels very comfortable with the cast they have assembled for the creative geniuses Arcangeli and Saxton. Sandra commented further, “When you look at a show like ”˜True Blood,’ they had the opportunity to make up their own town of Bon Temps, which doesn’t really exist and they could create the inner workings of the series and characters around a town they had total creative control of. But for us, we had the task of making this vampire story and choosing actors to inhabit the characters in a region of the city that is well known the world over. Everyone dreams of Beverly Hills, Malibu and this region, so we had to make sure that we chose all of the actors who can convey the sensuality, beauty and excitement that is synonymous with this region.”

“I think we did it, Tommy. This project is everything we all dreamed of and then more. I believe we have found the best actors for each character and Sandy and I are both very confident with the final script. I think you are going to be amazed by it,” concluded Eric Ragan.

Next week is part two of the interview with the casting directors and an exclusive interview with Budd Moss on what makes these stars the perfect actors to inhabit the vampires of the 90210 region.