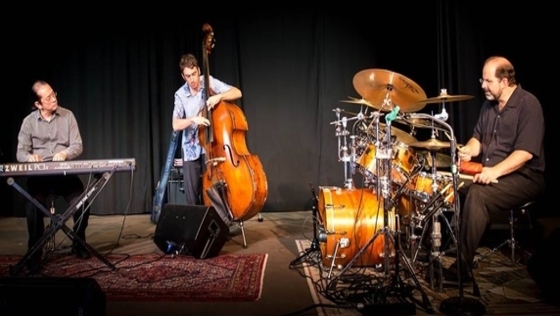 SHERMAN OAKS—The acclaimed jazz band, Charged Particles, will be giving a one-of-a-kind performance at Cafe Cordiale in Sherman Oaks on Sunday, February 16 from 8 p.m. to 11 p.m.

The band formed 20 years ago in Ohio, but has expanded into a musical sensation that has critics and audiences raving. Despite the many years of touring all over the world, these musicians continue to enjoy every performance.

“It is incredibly exciting to go on tour,” said drummer Jon Krosnick. “We are lucky to play in such top venues as Cafe Cordiale.” The band also features Murray Low on keyboards and Aaron Germain on acoustic and electric bass.

The trio combines various styles such as Latin music, classical music and funk to create a new sound in the electric jazz scene. What makes the music played by these musicians so incredibly unique is the difficulty level in the musical composition as it is not a type of conventional jazz many are used to hearing.

Charged Particles gained national recognition on National Public Radio’s live performance program, “Detroit Jazz Alive.” Their audience grew rapidly soon after which lead to performances at festivals and clubs all around the country. The band has opened for national recording artists such as Stanley Jordan, Yanni and Al DiMeola in addition to having popular drummers Peter Erskine and Dennis Chambers sit in with them.

At one point in their career, a radio station actually denied playing a song from Charged Particles’ album. It was stated that since each song varied so tremendously, radio listeners would falsely categorize the band’s style after hearing one song. However, this is exactly why the band has reached such success through the years. They cannot be placed under any one category due to their cohesion of different styles of music, allowing audiences to never grow tired of listening to them. These musicians collectively make a sound that has its own caliber of both skill and rarity.

The performance at Cafe Cordiale is especially unique as it will feature talented musicians alongside Charged Particles such as award-winning saxophonist Jade Elliott and internationally known singer Kevyn Lettau.

“The most gratifying part of performing is the connections made with people,” said Krosnick. “Within the band there is a connection as we create something that is bigger than us which sends messages about the essence of life to the audience.”

Each unique composition will reaffirm the notion that Charged Particles is a band that is capable of expressing their passion for music in an art form so riveting it must be experienced first-hand.