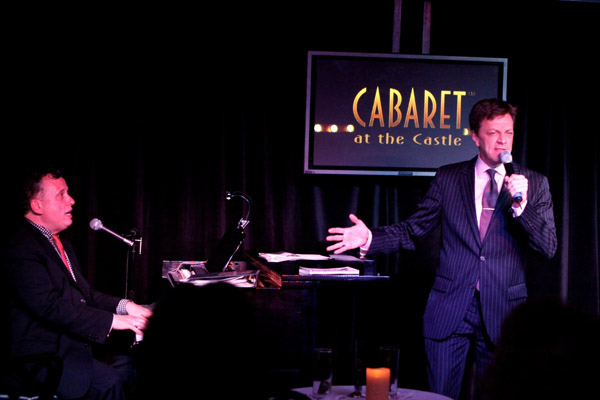 HOLLYWOOD—For the third time in as many months, Jim Caruso and Billy Stritch are thrilled to announce their return to The Magic Castle for two nights on Wednesday and Thursday. As before, the event will take place at The Inner Circle at the Castle (700 Franklin Avenue in Hollywood). Doors will open at 6 p.m. for singer’s signup, and the open mic-style variety show will start at 8 p.m.

Jim Caruso”˜s “Cast Party,” an extreme open mic and Manhattan mainstay, has taken on a residency at the Inner Circle Room, turning away hundreds of audience hopefuls each time. After a full-page color feature in the Sunday LA Times and three hours on the top-rated KTLA Morning Show, the room sold out in record time for the first two bookings. The event has featured a who’s who of talented guests, including Melissa Manchester, Cybill Shepherd, “The Tonics,” Joely Fisher, JoAnne Worley, “Legally Blonde” composers Larry O’Keefe and Nell Benjamin, Taylor Dayne, Jason Graae, Debbie Boone, Shoshana Bean, and Broadway leading man James Barbour.

WHEN: Wednesday and Thursday, July 21/22

WHERE: The Inner Circle at The Magic Castle, 700 Franklin Avenue in Hollywood

Jim Caruso’s “Cast Party” is a wildly popular weekly soiree that has been bringing a sprinkling of Broadway glitz and urbane wit to the legendary Birdland in New York City every Monday night for the past seven years. It’s a cool cabaret night-out enlivened by a hilariously impromptu variety show. Showbiz superstars hit the stage alongside up-and-comers, serving up jaw-dropping music and general razzle-dazzle. Cast Party is the ultimate spot to mix and mingle with talented show folk and their fans. The buoyant, sharp and charming Caruso guides the entire affair like a bubbly cruise director, musical genius Billy Stritch holds court at the ivories, and the audience is invited to participate in the festivities! It’s the party that would happen if somehow David Letterman and Ed Sullivan threw a hip house party around a grand piano!