The house has been considered a trophy property due to all of the elaborate and decorative designs with panoramic views of downtown Los Angeles and Pacific Ocean. The property is 15,200 square feet with 7 bedrooms and 13 bathrooms in a secluded area of Beverly Crest. The developer spent more than $2 million on the outdoor kitchen equipped with four refrigerators, pizza oven, room for six kegs and a grill along with a resort style infinity pool that acquires two Baja shelves and stretches 65-feet long. The other “master suite” infinity pool has a clear glass siding, allowing the swimmer to see the city views from underwater.

The home consists of 15,200 square feet of space. The main indoor kitchen has double islands, a walk-in pantry and a separate additional prep kitchen. Described as the “Wellness House” by Altman, the property also includes a professional gym, massage room, meditation area, juice bar, and a steam sauna. There are two movie theaters built in the home with starry night designs on the ceiling. The garage itself has room for eight full vehicles along with four turntables on the floor, allowing for vehicles to be displayed. The property also features a glass elevator. 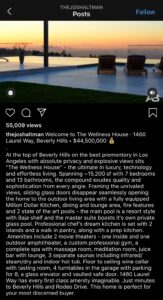 The original home was built in 1961 and been renovated several times since then. Altman originally set the price at $48 million on his YouTube video, but the price dropped on the MLS to $44.5 million, with each square foot being approximately $990.