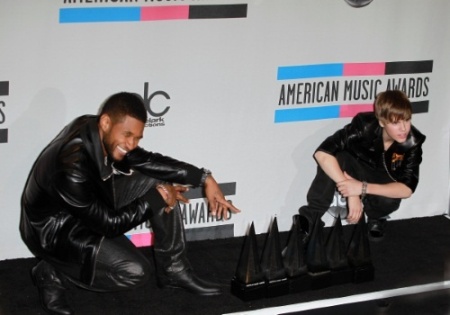 HOLLYWOOD—Pop sensation Justin Bieber swept the 2010 American Music Awards on Sunday, November 21.  He took home the award for Artist of the Year beating out fan favorites Eminem, Katy Perry, Lady Gaga and Ke$ha. He also took home awards for Breakthrough Artist, Favorite Pop/Rock Album and Favorite Pop/Rock Male Artist.  He also took the stage to perform “Pray” as he sat behind the piano and was later joined by a choir on stage.

Other big winners of the night included rapper Eminem who won two awards for Favorite Rap/Hip-Hop Male Artist and Favorite Rap/Hip-Hop Album for “Recovery.”  Usher took home two awards for Favorite Soul/R&B Album for “Raymond V. Raymond” and Favorite Soul/R&B Male Artist.  Rihanna opened the show performing a medley of hits from her new album “Loud,” including “Love the Way You Lie (Part II),” “What’s My Name” and “Only Girl (In the World).”  The songstress had a strong opening that seduced the audience.  A funny moment at the ceremony involved rapper Nicki Minaj who did a bit of promotion for her new album “Pink Friday” while presenting.  The album hit stores on Monday, November 22.

The Black Eyed Peas performed their massive hit “The Time (Dirty Bit)” getting the crowd engaged and the energy was incredible.  Other memorable performances included Pink, who sang her hit “Raise Your Glass.”  There was plenty of choreography and antics from the performer who never disappoints an audience.  Ne-Yo promoted his new album “Libra Scale” by singing a medley of hits that included “Champagne Life,” “One In a Million” and “Beautiful Monster.”

Taylor Swift blessed the crowd with a rendition of her somber “Back to December” while playing the piano.  Is there anything this woman can’t do? Having already sold over a million albums in one week, Swift is unstoppable. She also won for Favorite Country Female Artist.

Bon Jovi had perhaps the strongest performance of the night singing his classics “You Give Love a Bad Name” and “It’s My Life,” which had the entire audience and viewers singing along.  He truly knows how to rock the stage. Singer turned actress Christina Aguilera belted out the song “Express” from her new film “Burlesque” complete with the use of chairs on stage.  The musical arrives in theaters just in time for Thanksgiving.

Other winners included Brad Paisley, The Black Eyed Peas and Michael BublÃ©.  The ceremony closed with a reunion between boy bands New Kids On The Block and the Backstreet Boys who came together to perform a medley of their classics including “I Want It That Way,” “Larger Than Life,” “The Right Stuff” and “Everybody.”  It was nice to see these bands, who dominated the ’80s and ’90s, re-emerge to take the stage.

The 2010 American Music Awards wasn’t the most memorable awards show I’ve seen this year.  Many viewers were stunned just like me that pop sensation Lady Gaga was snubbed at the ceremony.  She was perhaps the biggest artist of 2009 and 2010, yet she didn’t win a single award.  The performances weren’t top notch and the show dragged a bit during the three-hour show. The winners were a bit predictable in many of the categories and there weren’t many surprises that had viewers at home saying, “Did you see that?” Here’s hoping that the 2011 American Music Awards infuses a bit more excitement and unpredictability in next year’s ceremony.