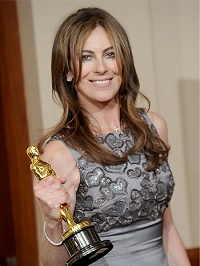 HOLLYWOOD —The 82nd annual Academy Awards made history on Sunday, March 7, when Kathryn Bigelow was named Best Director for her film “The Hurt Locker.”  It was the first time ever that a woman received the Academy Award for Best Director and only the fourth woman to be nominated in the Academy’s history; previous nominees include Lena Wurtmuller for 1976’s “Seven Beauties,” Jane Campion for 1993’s “The Piano” and Sophia Coppola for 2003’s “Lost in Translation.”  So many are left asking the question, what took the Academy so long?  If you take a look at the previous work of the nominees you’re likely to discover that they’ve all tackled an array of genres. Whether it is horror, drama, comedy, romance or war, their film achievements read like that similar of many other acclaimed directors in the industry.

What Bigelow did was something that was unexpected by many, she took a script about the Iraq War and an elite bomb squad and created a magnificent piece of cinema that was powerful and gripping.  What amazed me was that so many people were astounded that a female made what many proclaimed to be a “male action movie.”  Precisely what is a “male action” film?  Kathryn Bigelow directed “Point Break” starring Keanu Reeves and Patrick Swayze back in the early ’90s, and that was an action film.  So the distinction between what constitutes a female picture and male picture is the biggest issue withHollywood acknowledging women.

Bigelow said it best while answering questions backstage at the press room after winning the Oscar for Best Director: “I’d love to just think of myself as a filmmaker, and I long the day when a modifier can be a moot point.  But I am ever grateful if I can inspire some young intrepid, tenacious male or female filmmaker and have them feel that the impossible is possible and never give up on your dream.”

This is a powerful statement that should be echoed throughout Hollywood because in the end it’s about the work itself not about the sex, color, religion or other modifiers that come with the distinction.  Barbara Streisand who was famously overlooked by the Academy for a Best Director nod for her stellar work in the 1983 film “Yentl” was ecstatic to award Bigelow with the distinction.  “Yentl” won several Golden Globe awards in 1983 including Best Director for Streisand.

The year 2009 saw a sleuth of popular films directed by women.  Nora Ephron stepped behind the camera to direct Oscar darling Meryl Streep on her 16th nomination for Best Actress in “Julie and Julia,” while Nancy Meyers directed Streep in the comedy “It’s Complicated” —two films that drew moviegoers to the multiplexes.  Meyers was also the genius behind the camera that garnered Diane Keaton an Academy Award nomination for Best Actress in 2003’s “Something’s Gotta Give.”

Other notable female filmmakers in Hollywood include Gina Price Bythewood, “The Secret Life of Bees”; Drew Barrymore “Whip It”; Julie Delpy “The Countess”; Anne Fletcher “The Proposal”; Catherine Hardwicke “Twilight” and Sarah Polley “Away From Her” to name a few.  All were films that had massive success at the box-office or received positive reviews from critics.

The public’s perception is that female directors don’t exist and if they do it’s in small quantities. Hollywood is known to have more male directors than female directors, but a bigger problem inHollywood is that most of the films have a male gaze; it’s a film directed by a male with the expectation that the movie will be seen by other males.  With more female directors getting acknowledgment in cinema we are beginning to see the female gaze come to the forefront. More films are directed from the prospective of a woman with the assumption that the film will be viewed by women as well as men.  So not only is the depiction of women in cinema changing, but the perception of what a woman behind a camera can do is evolving.

History was made a few short weeks ago and because of that the way spectators view cinema and how women are perceived behind the camera will change.  More female directors will receive the opportunity to assume the director’s chair and provide their vision of a script or a movie that they want, regardless of the genre and without gender becoming an issue.  Bigelow proved that a woman can create as powerful a film as a man, and while many questioned whether the Academy was going to award her because it was long overdue shouldn’t be an issue. The bottom line is that she directed the best film of the year.  It was intense, and full of impressive performances.  As I’ve stated before it’s not the person behind the camera that matters, it’s the quality of the work that ultimately counts.