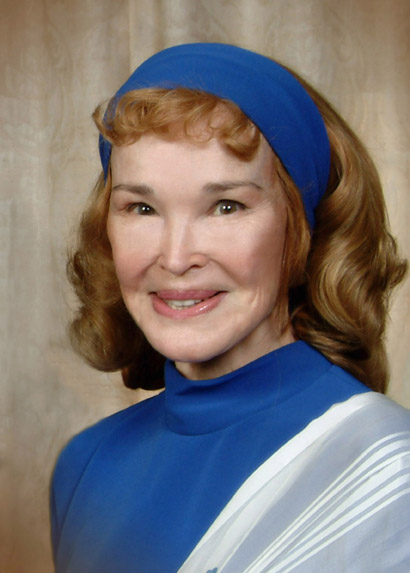 HOLLYWOOD—Kathryn Crosby performed this show last year to sold out crowds at Feinstein’s at the prestigious Regency Hotel in New York, at the Friars Club in Beverly Hills and many other venues across the country.

In addition to numerous hit songs and stories, the show includes a multi-media presentation with film clips that follow the lives of Kathryn and Bing from their Las Vegas wedding as well as footage of Bing and Bob Hope on the golf course, and home movies of Bing welcoming his first daughter Mary. The show contains a celebration of Holiday music, which will of course include Bing’s most famous hit “White Christmas.”

Crosby, who is the widow of Bing Crosby, began her acting career at age three in “Toymaker’s Dream.’ Ms. Crosby’s last appearance on Broadway at the Music Box Theatre in 1996 was in Rodgers and Hammerstein’s “State Fair” co-starring John Davidson, Donna McKechnie and Andrea McArdle. On film she appeared opposite Richard Kiley in “The Phenix City Story” (1955), Tony Curtis in “Mister Cory” (1957), Jack Lemmon in “Operation Mad Ball” (1957), James Stewart in “Anatomy of a Murder” (1959) and Victor Mature in “The Big Circus” (1959), among others. She may be best known as the princess-in-distress in the special effects laden epic fantasy “The 7th Voyage of Sinbad” (1958), Kathryn Crosby was married to Bing Crosby from 1957 until his death in 1977. She appeared on many of her husband’s Christmas Specials as well as on her own “Kathryn Crosby Show.” She is the author of two books, “Bing and Other Things,” and “My Life with Bing,” and hosts the annual Crosby Golf Tournament in Winston-Salem, NC.

Edward (Eddie) Sayegh is an internationally distinguished vocal instructor. Mr. Sayegh received his training at San Francisco Conservatory of Music and The Conservatory of Music in Rome. He headed the vocal department at the American Conservatory Theater (ACT) for six years. His piano orchestral appearances include the San Francisco Chamber Orchestra, LA Philharmonic, Glendale Symphony, Hollywood Bowl Orchestra and San Gabriel Valley Symphony, with recitals in London, Tokyo and New York. In 1995, he was requested to perform for the King and Queen of Jordan. Mr. Sayegh has been a Musical Consultant for numerous production companies and has worked with many notable directors, such as Oliver Stone and Steven Spielberg. He has consulted on many international productions, including BBC Television’s “Bing Crosby, Singer of the Century.”

WHAT/WHO: Kathryn Crosby film, television and stage star brings her one-woman show to Cabaret at the Castle for a limited engagement. Bing Crosby is remembered by Kathryn Crosby in My Life with Bing, under the Musical Director Edward Sayegh at the piano.

WHERE: The Magic Castle’s Inner Circle, 7001 Franklin Ave. in Hollywood
(Dress code: Jackets & ties for men and dresses or suits for ladies)