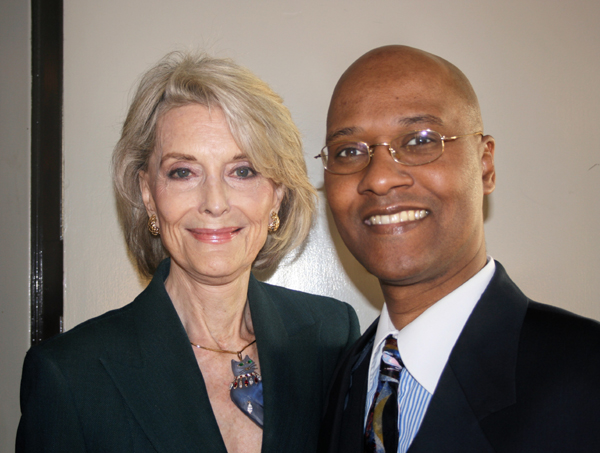 HOLLYWOOD—Singers James Eubanks and David Johnson’s third annual edition of “Two Guys with Glasses Singing” wowed ”˜em at The Paul Gleason Theatre in Hollywood last weekend. Because I had to go out of town on business, my personal assistant, Dee Jacobi, took in the double bill for yours truly.

“Tommy, it was a great afternoon of entertainment,” Dee reported to me. “First up was David Johnson, who has this dreamy crooner voice and this enormous knowledge of vintage films, which he very cleverly ties in with his songs.”

“People tell me that they love the stories attached to these movie songs,” Johnson commented to Dee. “So that is very gratifying to hear. My special area of expertise is the late ”˜30s through the ”˜40s and into the ”˜50s.”

Johnson’s mentor, Constance Towers (“General Hospital’s” velvety villainess Helena Cassadine), was unable to attend this year’s show too. “Connie is the current president of The Blue Ribbon,” Johnson explained to Dee, “which is the women’s organization founded by Dorothy Chandler [in 1968], and they are devoted to promoting the performing arts. Connie had to attend a performance of ”˜Siegfried’ [one of the operas in the classic Ring Cycle] downtown at the Music Center. Disappointing not to have Connie in our audience this time but a president’s gotta do what she’s gotta do. Connie was definitely there in spirit with us, though.”

Next up was Johnson’s co-star James Eubanks, Dee described. “James has a great delivery and did a wonderful medley of theme songs from the movies of the ’60s and ”˜70s. He sang the themes from ”˜Thunderball,’ ”˜To Sir with Love’ and certainly one of the most bizarre but beautiful songs ever written, ”˜Ben.’ [Ben was the title character of a rat in the sequel to the surprise 1971 hit, “Willard.”]

“James is also a very talented songwriter,” Dee added. “He sang some of his own compositions, and they’re terrific.”

At the close, Eubanks and Johnson joined forces to sing a couple of duets a la Frank and Dean. “It was hilarious,” Dee reported. “David flubbed the opening lines to ”˜Close to You’ and pretended nothing was wrong, wearing this totally deadpan expression on his face. But the audience knew the song so well that there was no fooling them. The quips flew back and forth between the guys. The crowd was in stitches, they loved it. A great finish!”

With such a successful third engagement behind them now, Eubanks and Johnson are already planning a fourth edition of “Two Guys with Glasses Singing” for next Spring.

Photograph the property of:  ICONS PR, Taken by Teressa Priem