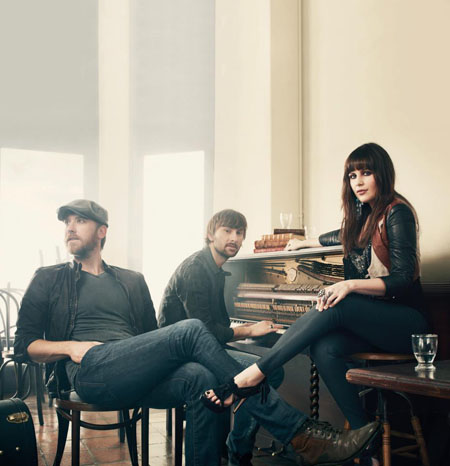 HOLLYWOOD—Lady Antebellum ruled supreme at the 53rd Annual Grammy Awards taking home four trophies including Song of the Year for “Need You Now.”  Jay-Z was the night’s other big winner with three awards including Best Rap Song for “Empire State of Mind.”  Album of the Year in a shocker went to The Suburbs for “Arcade of Fire,” a surprise even the winners didn’t expect.  My money was on Eminem for the prize and in a possible upset Lady Gaga for “The Fame Monster.”

The ceremony opened with a powerhouse performance dedicated to the one and only Queen of Soul, Aretha Franklin. Paying homage in the tribute included Yolanda Adams, Martina McBride, Jennifer Hudson, Florence Welch and Christina Aguilera.  Each took turns singing Franklin’s hits including “Respect,” “Natural Woman,” “Freedom” and “Think” to name a few. All five of these ladies vocally hit notes that sent chills down the spine; utterly the best performance I’ve seen at the Grammy’s in years. Aguilera’s rendition of “Ain’t No Way” showcased her finest vocal ability; she stole the show. The ladies later joined the stage to present the first award of the night for Best Pop Performance by a Duo or Group, which went to Train for “Hey, Soul Sister.”

Lady Gaga performed her new single “Born This Way,” complete with theatrics only one’s mind could imagine. She took the stage emerging from her pod. The choreography was on point and the energy on stage was incredible; one of a kind. She took home three Grammy awards including Best Pop Vocal Album for “The Fame Monster.” “Thank you so much from the bottom of my heart to all my fans, my little monsters watching,” said Gaga while accepting her award. She dedicated her new album “Born This Way” to singing icon Whitney Houston who inspired her.

As for the other performances, nothing seemed to top the first two performances of the night.  It just seemed like musical act after musical act took the stage, without much fire or energy.  Miranda Lambert performed a dreary rendition of “The House That Built Me” and was introduced by her fiancÃ© Blake Shelton.  Lenny Kravitz introduced Muse to the stage as they rocked their frenetic hit “Uprising.”

Bruno Mars, B.o.B. and Janelle Monae took the stage to perform the 2010 smash “Nothin’ on You.” Bruno Mars then stole the show singing his hit “Grenade.” Janelle Monae had her solo performance as she sang “Cold War.” Best Female Vocal Country Performance was awarded to Miranda Lambert for “The House That Built Me.’’ “First Grammy performance, first Grammy award ever,” said Lambert while on stage.  Justin Beiber took the stage with mentor Usher and sang his undeniable hit “Baby.” He later transitioned to his single “Never Say Never” with assistance from Jaden Smith. Usher later performed his summer anthem “OMG.”

Best Rock Album went to Muse for “The Resistance.” Lady Antebellum sang their ubiquitous hit “Need You Now” and moments later won the award for Best Country Album beating out perennial favorite Miranda Lambert for “Revolution.” Cee-Lo Green performed his unbelievable tune “F*** You” alongside Oscar-winner Gwyneth Paltrow. He rocked the piano dressed as a peacock and had puppets as backup singers. It was a hilarious moment of the night and unlike anything you’ll ever see at the Grammy awards. Katy Perry dedicated her hit “Teenage Dream” to all the lover’s at the ceremony in honor of Valentine’s Day.

Rihanna, Dr. Dre and Eminem also performed. Rihanna kicked off the performance singing “Love The Way You Lie Part II” and moments later Eminem joined the stage receiving a standing ovation. Esperanza Spalding won for Best New Artist. Many thought it was a two-way battle between Justin Beiber and Drake. Best Rap Album was given to a deserving Eminem for his comeback album “Recovery.”

Rihanna took the stage a second time performing with Drake “What’s My Name.” The chemistry between the duo was definitely hot. The nail-bitter award of the evening, Record of the Year, went to Lady Antebellum for “Need You Now.”  This was a huge shock because many expected Eminem and Rihanna’s “Love The Way You Lie” to take the award.  As I always say, never predict the Grammy’s; it’s the most unpredictable awards show ever.

This was perhaps one of the longest running Grammy ceremonies I’ve seen in years. It just seemed to drag way longer than what it should have. I’m hoping next year’s ceremony is much better, and the focus is instead on giving out awards to many deserving artists who never get to accept their awards on stage during the live telecast.