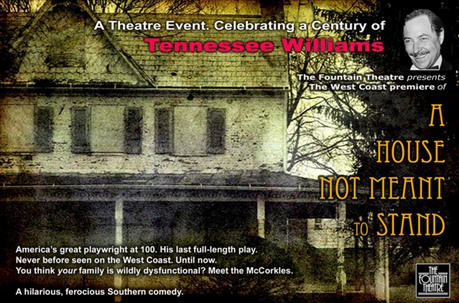 WHAT: “A House Not Meant To Stand” The Fountain Theatre celebrates the centennial of Tennessee Williams’s birth with the presentation of his final play, never before seen on the West Coast. This turbo-charged tragicomedy about the blazingly dysfunctional McCorkle family—which Williams called a “Southern Gothic spook sonata”— is searing, savage and hilarious.

WHERE: The Fountain Theatre at 5060 Fountain Ave. (Fountain at Normandie) in Hollywood

Housed in a charming two-story complex in Hollywood, The Fountain Theatre is one of the most successful intimate theaters in Los Angeles, providing a nurturing, creative home for multi-ethnic theater and dance artists.