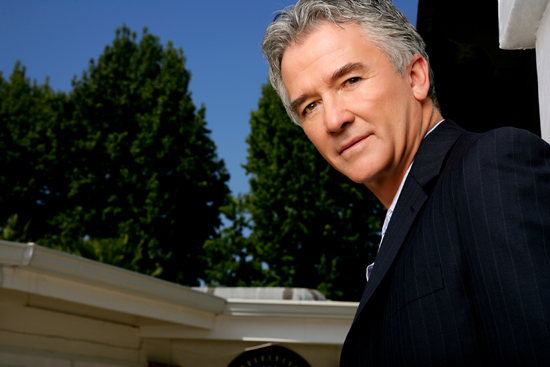 HOLLYWOOD —This week’s leading men gold standard goes to three actors whose shoulders needed a hand on. They showed what standup characters on soaps are all about. Patrick Duffy, once Bobby Ewing on the CBS mega primetime drama “Dallas” shows a side of Stephen Logan on “B&B” that no one realized existed. Van Hansis, who portrays Luke on “As The World Turns” supported a friend in problems he’s having with the medical board and the law and last but not least, Don Diamont who portrays Bill on “The Bold and the Beautiful” offered his wife and her family moral support, showing a side of Bill Spencer that is rare but welcoming to viewers. Each of the three actors have mastered being supporting players when they are by far leading players on their soaps.

Patrick Duffy as Stephen Logan, the once absentee father and husband is incredible on “B&B.” This week’s episodes included scenes Duffy had to play opposite the great Susan Flannery (Stephanie), star John McCook (Eric) and his TV wife Robin Riker (Beth). Duffy may be a recurring character on “B&B” but that doesn’t stop the master from being absolutely perfect with every actor. When Stephen brought Beth home to L.A. to see daughter Brooke, Donna and Katie, the wife and mother who returned was a shell of the person she used to be. The patriarch Logan is now a very dependable husband unlike the one he was early in his marriage to Beth. Stephen is far from a broken man, but he has a broken heart, because being married to a wife with Alzheimer’s is truly the long goodbye. Patrick Duffy was amazing in every scene and seeing his ability to go head to head with Susan Flannery, who is Stephen’s arch-nemesis was fabulous and exciting to watch. By the end of the week, Stephen’s heartbreak grew even more as he watched a tragedy befall his family. One the Logans won’t soon forget. Patrick is an actor who is unforgettable as well.

Van Hansis who plays Luke on “As The World Turns,” is one half of the Nuke super couple. Luke and Noah called it quits last week, but leave it to Chris Goutman who helms “ATWT” to find yet another man that Luke may be able to help. He’s always been there for his family and his lover Noah, but now that Noah says he’s done and doesn’t want Luke anymore. The handsome blond decided to move on to greener pastures, even though his heart still remains with his first love. Luke helped Reid this week in his legal battles with the medical board and need I say, fans see another super couple in the works. Hansis is sublime as an actor and is playing his role perfectly.

Don Diamont portrays the billionaire hard-hearted Bill Spencer. However this week, the stoic businessman became a shoulder to cry on for his wife Katie and her sister Donna. Bill’s nursing a grudge against the Forrester clan, but he managed to put it aside and overwhelm his wife and her sisters with his heartfelt concern for their mother Beth, who is unsuccessfully battling Alzheimer’s. Seeing this side of Don is what fans needed to witness so they can see what a multi-talented actor Don Diamont has always been. Bill is planning something that will leave viewers stunned and Diamont’s fans breathless. Trust Bradley Bell’s vision for the Forresters, Logans, Spencers and Marones. “B&B” is the most watched show in the world, for good reason.