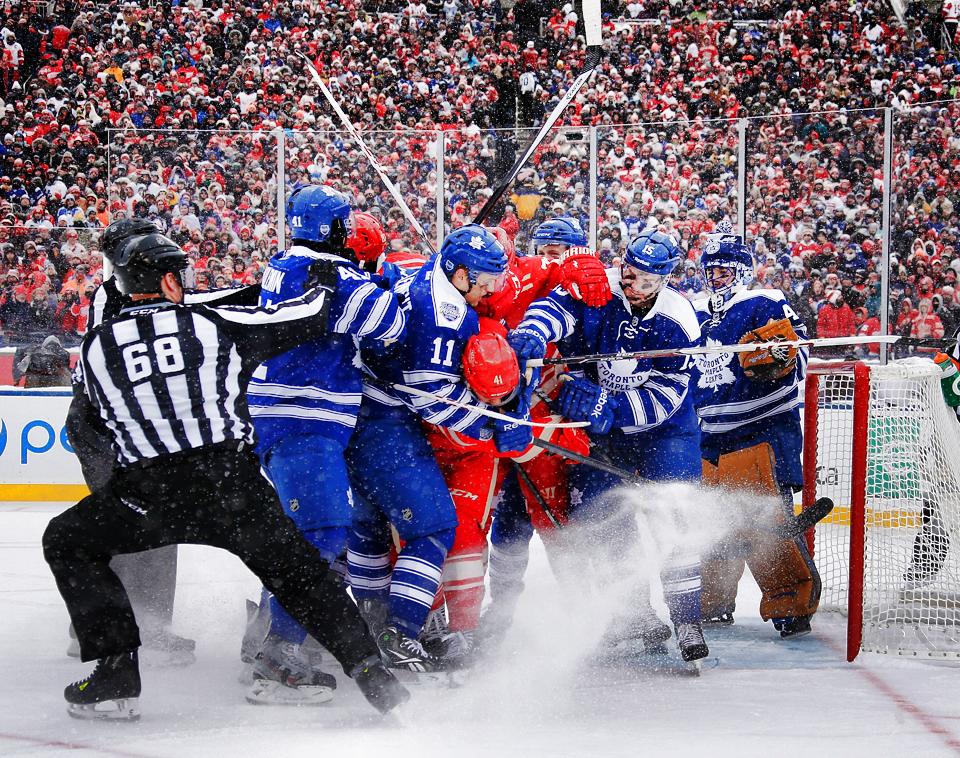 ANN ARBOR—For the third Winter Classic in a row, the home team didn’t win. Tyler Bozak stole the spotlight from the home team in the NHL’s biggest game in history with a third round score in the shootout to win 3-2 at Michigan Stadium on New Year’s Day.

It’s the biggest game Detroit held at the University of Michigan’s Big House where 105,491 spectators watched. Detroit took a big advantage over the Toronto Maple Leafs on December 21 in a 5-4 rare win at Air Canada Centre. With Detroit hosting their Atlantic Division rivals, the advantage falls in their favor. The Red Wings have won their first of two in the 2009 NHL Winter Classic beating Chicago at Wrigley Field in 2009. Aside from the chance of winning the big matchup, both teams share fourth place with 45 points in the division and only one can reap the profits of success.

The game began with the puck making it difficult to move on the ice with the continuous snow falling on the ice. Both teams made the effort to control possession as Detroit forward Niklas Kronwall lost sight of the puck while skating into the neutral zone. As the snow was cleared, the game returned to a normal pace.

Toronto caught their first power play seven minutes into the first with Detroitopening their PK with solid four man defense in the Maple Leafs offensive zone. The pace turned slow as both the Red Wings and Leafs spent extra time making clean passes to their teammates with the puck losing friction. Detroitwent on the power play as Joffrey Lupul gave a stick to the midsection of Patrick Eaves who had to be helped off the ice. The Red Wings took two shots on ice with Daniel Cleary nearly getting the puck under the pads of Torontonetminder Jonathan Bernier.  Toronto earned two power plays in the period, but at the end of 20 minutes, the Red Wings outshot Toronto 13-5, winning 14 of 23 on the faceoff dot. The game was going Detroit’s way.

The second period went along smoothly as the snow began to fall lighter making the pace return to a normal run. Detroit and Toronto kept their offenses close with the Red Wings gaining ground and Maple Leafs end opening their scoring chances on Bernier with a shot that went off the puck eight minutes into the period. Detroit connected on their second scoring chance as the Wings went 2 on 1 with Zetterberg sending the pass to Daniel Alfredsson; his skate hit the puck with no forward motion to give the 41-year-old veteran his 11th of the season. Cleary took another chance after the Red Wings gain of the lead, putting pressure near the Toronto crease.

The Leafs took their shots on the man advantage to try to even the score.Toronto worked their pass plays between the neutral zone and the Torontoend. A chance from Mason Raymond nearly caused a scramble that sent the high up above Jimmy Howard, but the dislodging of the net saved their bacon.  Luck wouldn’t be on Detroit’s side for long as Toronto scored with 36.5 seconds left with a shot high on the slot from James van Riemsdyk for his 15th. His unassisted shot to tie the game was left with Toronto playing at the same level as Detroit.

The third period saw a change in rules as the wind began to increase at Michigan Stadium where both teams would switch sides midway to give both an equal level of play. Toronto managed to score a second goal against Howard, but a key moment came where Bozak looked to have put his stick above the crossbar. Video evidence determined that Bozak’s stick was below the bar prior to the stick’s impact with the puck giving his fifth of the year.

The change of sides went in Detroit’s favor as a pass from Brendan Smith to Justin Abdelkader in front of the Toronto crease to put Detroit back into contention with a 2-2 tie. It was Abdelkader’s eighth with five minutes left in regulation. Time continued to fall off the clock as Toronto and Detroit would need another five minutes to get a winner from the mix of ice and snow. The Red Wings outshot the Leafs 41-24, but with Detroit’s history in OT, it could become a concern, or a blessing from the hockey gods.

In the first half of the overtime the Red Wings took a single shot on Bernier with his team puling off the same result. The switch gave each team an even chance with both having the opportunity in the offensive zones. It didn’t help as Detroit took three shots on the Maple Leafs net, but could not find a break. It became the third time in Winter Classic history that the game went to its furthest ending in a shootout.  Detroit and Toronto saw themselves in their second shootout this season with Detroit winning the first.

Daniel Alfredsson went first for the Red Wings, but his shot never came off and went wide. Datsyuk scored on a lifted shot from the backhander that gave the Red Wings the upper hand. Joffrey Lupul evened it up through two rounds with a snap shot that went through the five whole of Howard. Tomas Tatar messed up his shot leaving Toronto with the chance to close it up. The game went into the hands of Bozak whose shooting skills beat out Howard on the stick side.

The game winner became Toronto’s first victory in their first Winter Classic with the honors going to Bozak and Bernier who made 41 saves picking up his 13th victory. The Leafs took a one-point lead over Detroit, but the season was not over for either team. Howard finished a strong game shutting outToronto through 33 minutes of the game. He made 24 saves with a .923 save percentage that eventually brought him good news as he was selected to theUnited States hockey team. Along with Howard, Toronto’s Phil Kessel and van Riemsdyk were selected to the team.

Toronto will soak in the big win over their rivals, but must go back to work as they face the Rangers on Saturday. The Red Wings might have enjoyed the environment that the Winter Classic had to offer, but a four-game trip out west spanning nine days begins against the Dallas Stars over the weekend.