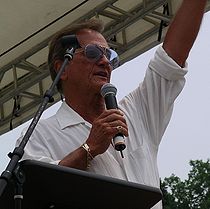 LOS FELIZ—Council member Tom LaBonge and the City of Los Angeles have declared July 12 “Pat Boone Day.” Boone is known around the world as a singer, actor and writer. He celebrated the day at the Las Palmas Senior Center along with LaBonge and his constituents. Fans of Boone who gathered at the Senior Center screened the Rodgers and Hammerstein musical “State Fair.

Council member LaBonge spoke of Boone’s legacy both as a Hollywood icon and an American icon: “More than a part of Americana, he has become a huge part of Los Angeles through his charitable efforts. Los Angeles loves Pat Boone.” In response, Boone said it was “tremendous to be honored in that company.”

The multi-talented artist once had Elvis Presley as his opening act and was born in Jacksonville, Fla. in 1934. Boone’s career in the entertainment industry began as an emcee hosting a radio and television talent show in Nashville, Tenn. He rose to fame as a pop star in the 1950s and ”˜60s. Boone has sold over 45 million albums during the span of his career, with 38 Top 40 hits and had starring roles in over 12 Hollywood films.

Boone continues to write and perform and has also branched out to other areas as a political commentator, motivational speaker and television personality. He continues to be a part of American pop culture to his many fans.