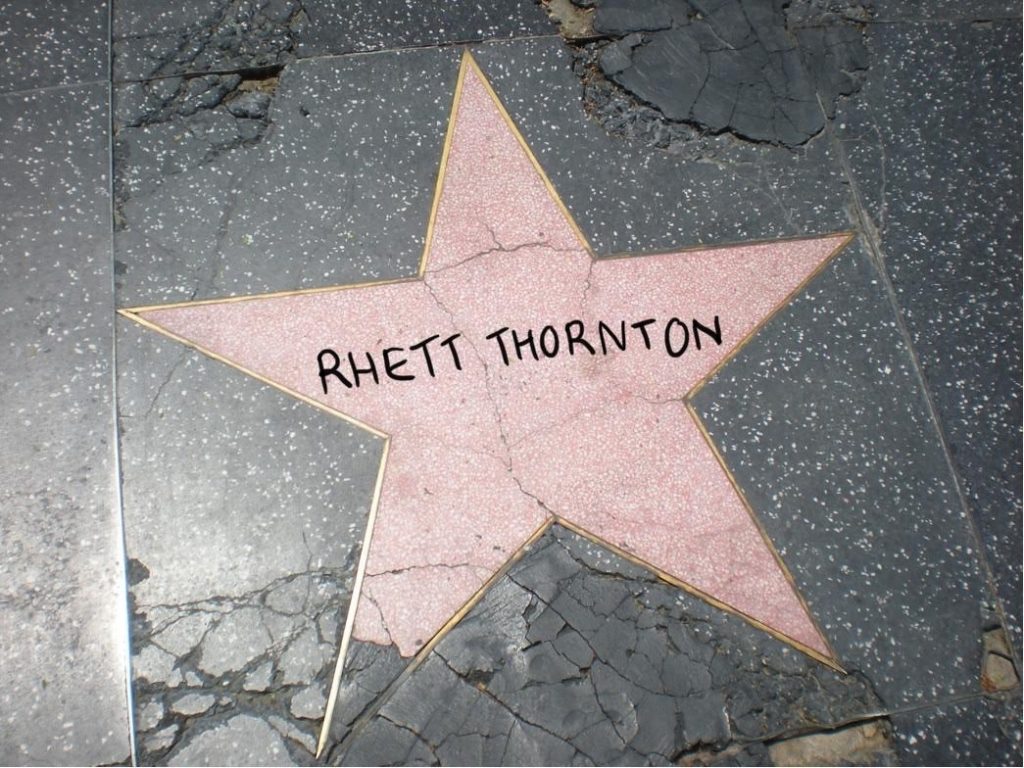 UNITED STATES—A couple phrases could evoke Rhett Thornton: washed up and full of himself. But no better actor in the world could play the former ’80s fringe star Rhett Thornton, than Rhett Thornton himself. In abeyance to the dubious solemnity Rhett, evoked in his ribald death-bed confession, Father Daniel did the sign of the cross. Rabbi Goldwyn was taken aback by Rhett’s vivid revelations.

“Rhett, the prayer of confession is pretty much a formality. You didn’t really have to go in all that detail.”

“Well, I can’t un-say it and I feel a better man for it. I really do wonder about that fan with B.O. who had my love child.”

“Be well, my son,” said Father Daniel. The priest and rabbi bid Rhett goodbye. Rhett had his assistant Eliza find the glass pipe and Rhett had a couple of bowls, which conjured a deep siesta. Eliza saw that the sound stayed off.

Meanwhile, breaking news of the geriatric bomb spilled across the wall of screens because of the coaxial glitch. Now, even ESPN was reporting on Roger’s and Eliza’s hoax that had been meant solely for Rhett Thorton’s living room. The geriatric bomb had been concocted to shake a couple million from the star terrified of losing the last his youthful looks.

Instead, it triggered a crazed exodus. Horns honked, nerves frayed, traffic clogged freeways, moms grabbed their babies, people fought to get on a bus heading away from the movie stars who had been targeted by terrorist group F.A.K.E. (Roger and Eliza).

Eliza now heard her ringtone start softly and crescendo. It was Roger “It’s caused a panic. I’ve got another surprise to tell you later,” he said before hanging up.

Rhett sat up from his nap around six o’clock, reached a hand for his remote. He saw the news. The caravans leaving Hollywood were mirrored in Lake Cuomo, by a similar exodus of taxis, bicycles and people on foot, even though authorities insisted that George Clooney was not in her residence there.

“This here geriatric bomb has got people all in a dither,” Rhett said, squinting his eyes. He called out for Eliza.

Rhett shed his blue-velour robe with RT embroidered in gold and asked for his deerskin jacket.

“Where are you going?” Eliza asked, bringing his favorite jacket.

He put on the jacket and stopped looking at the wall of screens. He stepped over to the picture window for this first time in months and looked out. Up and down the curled streets running and down Mount Olympus, people were leaving, throwing in suitcases and family fast as they could. Up and down the canyons, car doors slammed, ignitions started, and spinning rubber squealed as folks gunned it out of paradise, intent on reaching the likes of Lancaster and 29 Palms where seldom a celebrity roamed.

“I’ll sacrifice my looks, age sixty years and maybe die here. They can bomb me for all I care, but I want all other these people to stay young and live their full lives. I’ve had my ride.”

Eliza was impressed by Rhett’s stoic acceptance. Even if it was the spinoff of her and Roger’s fictional scam, it showed a true heroism.

“You’re a pretty young philly, Eliza,” Rhett put a familiar hand on Eliza’s shoulder, too familiar. She drew quickly away.

He held out the key to the Tesla.

“Are you trying to buy me?” she said, with a shrill disgusted edge.

“You git, I’ll be fine. The car is yours. Take your lovely cat, and git down the hill. All I want is that you live and stay pretty. I can still tell Goldylocks she’s a pretty cat, ain’t that right.” Rhett leaned down and peered in the cat’s face, “Goodbye, Goldylocks!”

He picked the plump cat up, petted it and handed it to Eliza.

“Please go. Save yourself from the dreaded geriatric bomb. Sayonara and happy trails.”

Eliza held her fluffy Egyptian cat and headed for the carport door. Her heart was both heavy and flooded by a realization of the nobler traits an elaborate fiction had revealed in her employer. As golden darkness gathered in the sunken living room, Rhett in his deerskin jacket waited silently.

He waited to the bomb to detonate and would never know how close he came to meeting his lost daughter from the groupie in Hickory Ridge. . . Eliza.