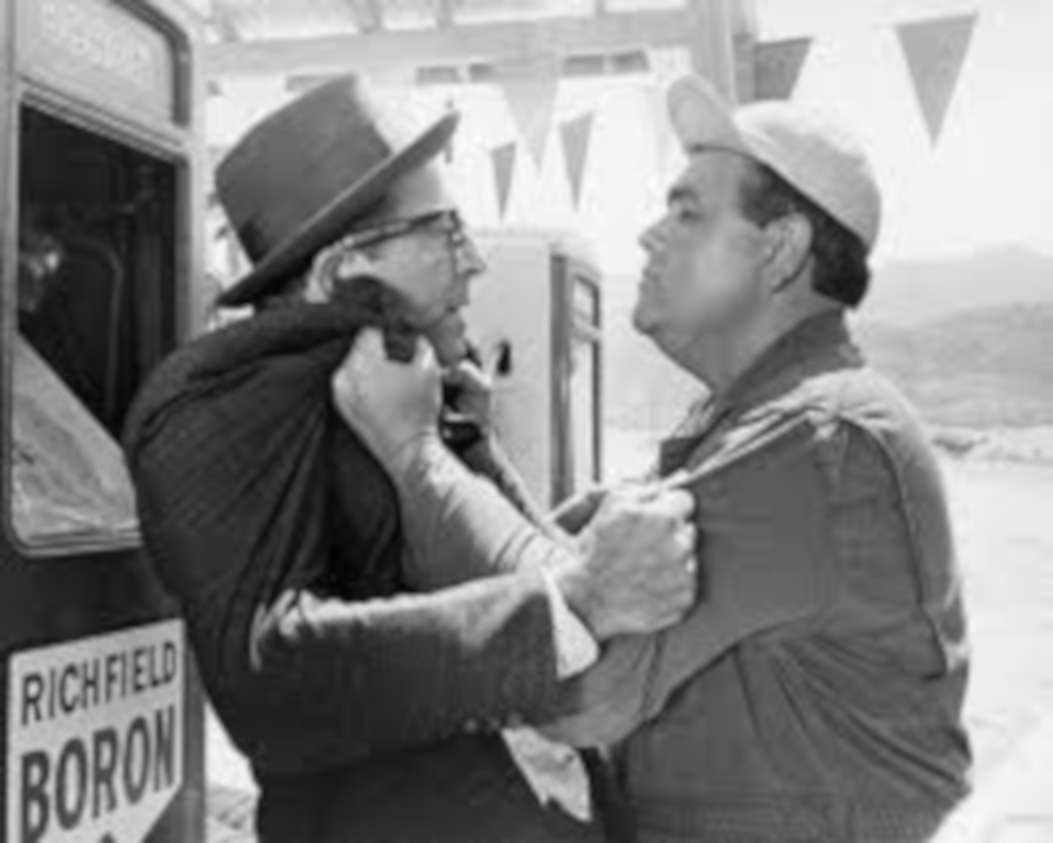 UNITED STATES—Let’s focus on some of the grand and sui generis talents that populate “It’s a Mad, Mad, Mad, Mad World.” The working title, by the way, was “Something a little less serious,” and believe me, we could all use something a little less serious. But put “Mad Mad Mad Mad World” in anybody’s mouth and it’s both grandiose and makes one smile.
One of the pillars of this epic comedy, is Jonathan Winters.

Within Mad World he is about the most sympathetic character. First, he’s a hard-working guy, he’s a trucker with a load of furniture, all of a family’s household’s possessions, in a van bound for Yuma, Arizona. I can’t help but imagine what happened to the family in Yuma, who didn’t get their furniture, after Winter’s Mr. Pike, joins the madcap race to reach the loot buried under a cryptic Big W in a fictive So Cal city Santa Rosita that’s as real to me as Pacoima.

Winters gets abandoned by the Merman family, stranded in the desert. His only means of escape, a girl’s bicycle picked from the pile of belongings in the moving van, later he flagged con-artist Phil Silvers from the side of the roadway, who won’t give him the time of day till he get’s a whiff of the 350K fortune everyone’s racing for, only to play a trick and leave Winters in the lurch.

He gets called ‘baby’ by Dick Shawn and doesn’t know how to take it. Winters later gets patronized by Phil Silvers, once they all meet at the site of the Big W.

This is a lot for a working stiff with a good heart like Winter’s Mr. Pike…Of all the people in the cast of travelers, Winter’s character most suffers the dilemma of duty versus wildly unexpected opportunity. He gropes with the responsibility of bringing a family’s belongings to Arizona.

A moment of pathos for the ages is right after Winter’s Mr. Pike gets comfortably seated in the car and then Phil Silvers gets Pike out of the car. There in the middle of nowhere, and the cycle glommed from the family furniture van. Glib, smarmy Phil Silvers from behind the wheel says, “Key, kiddo. Get that bike out of the road. Somebody might trip over it in the dark.” Mr. Pike dutifully gets out of the car and then hurls to bike with great gusto and all his might to the side of the desert highway.

Mr. Pike obediently carries out the suggestion. He strolls over to the bike, picks it up with gusto, and swings it with muscular abandon to heave it as far as it can go. Good-riddance. And before the flush of accomplishment wanes, crafty Phil Silvers has already got the pedal on the gas.

Phil Silvers zooms off. Mr. Pike’s huge beefy frame struggles with the damage he inflicted on the bike, wobbling alone through the Mojave on a little now-bent girl’s bike. Helped by Ernest Gold’s amazing score to evoke the heat, the desolation, and ruthlessness of the Mojave.

Jonathan Winters, looking back, commented that was “The toughest period of my life.” Not because of the conditions of filming. He’d just completed a eight month stay in a mental hospital on “April 1st, 1962,” he recounted to the Archive American television. And he gets a call from Stanley Kramer about one of the leads in these movie with Milton Berle, Jim Backus and Ethel Merman.

As Jonathan Winter’s tells it, he was in that period of readjustment and it was enough to get used to the kids, society and the family dog. He doesn’t really feel up to doing this…not yet. Winters turns to his wife and says, “I got this call from Stanley Kramer offering me a lead. I don’t know if I should do it.”

His wife, who fathomed the stigma of mental illness in show business at that time, said: “You better accept it…or you’ll never work again.” At which point he put on his cheerful voice and said, “You bet, Stanley, I’d love to do it.”

The fans of comedy will be ever grateful. Winters was grateful; the picture lasted six months and “It was a natural high” working with these people. One of the most memorable slapstick episodes in this “symphony of slapstick,” the destruction of a gas station was Winters pulling out all the stops and done in a single take. Winters summed it up, “It was a great time to become a madman and get paid.”