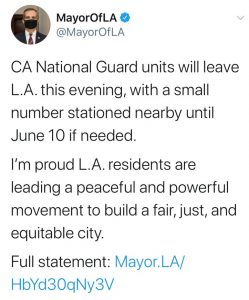 MELROSE—June 7, 2020. Eric Garcetti, Mayor of Los Angeles, announced on his twitter feed that he is proud of L.A. Residents for leading a movement to build a fair, just and equitable city. This coming just a week after slamming residents for wanting to get back to normal life. Garcetti’s politically driven do as I say, not as I do and don’t ask questions makes him a hypocrite.

Garcetti announced on May 13th, in regards to the lockdown, “We can’t expect that to disappear in a matter of weeks, or even a few months.”

Los Angeles County Public Health Director Dr. Barbara Ferrer stated, “I do think recovery will be months-long, based on the tools we have at hand today.”

She added, “with all certainty,” the orders will be expanded into August.

Elected Democratic politicians of California threatened, cited and arrested people who protested the 3 month Stay At Home Executive Orders, many arguing this was a political movement to unseat President Trump.

Garcetti publicly scolded Angelenos that were not obeying the strict stay at home orders by gathering with more than 10 people, not wearing masks or simply opening their business. He ordered utility companies to shut off utilities if anyone attempted to reopen their businesses. He cited and arrested law abiding citizens and business owners, guilty of only wanting to exercise their constitutional rights.

The mayor of Los Angeles didn’t stop there. He punished skaters by throwing sand in their skate parks, and hikers by putting up fences to enter the natural hiking trails across Los Angeles. They changed parking zones into no-parking zones by the beach and cited anyone that parked there. They did this in order to punish anyone that tried to go to the beach.

Lawful women business owners and pastors of local churches were arrested and cited for gathering with more than 10 people.

Garcetti continued to use fear tactics throughout his frequent messages. Demanding that we stay at home so we “save lives” by not spreading the deadly disease of Covid-19 or getting arrested and going to prison. They urged people to report anyone that broke these orders.

Supporters of Garcetti and Newsom acted as if they were brainwashed zombies, posting messages on Facebook, supporting the lockdown, long after President Trump urged politicians to open up their economy. Some would attack Trump saying he didn’t care about the deaths of Covid-19 and how they were his fault.

Even after the curve was flattened, Mayor Garcetti insisted we were in danger and needed to shelter in place until a vaccine was made available.

President Trump challenged the democratic states refusing to open up the economy, especially California, but they wouldn’t budge.

Then a week later George Floyd was murdered.

Covid-19 disappeared from the headlines while Floyd’s murder was politically spun into a racial and political movement, as professional democratic organizations such as Black Lives Matter and Antifa stepped into gear arranging national protests. Mayor Garcetti both condoned and promoted the protests even though there was very little social distancing and mask wearing.

Garcetti implemented a new order to stay at home, a curfew. Therefore business owners were not allowed to protect their businesses while riots and looting continued to happen without consequences night after night. Law enforcement were ordered to stand down.

Those among the protesters were people that supported the lockdown, yet now ignoring the safe distancing guidelines by meeting in groups of thousands of protesters and looters, under the guise of anti-discrimination, something that is not the issue with the majority of Angelenos.

Businesses which have been shut down for 2-3 months are now being looted and burned to the ground by protesters. Police are overwhelmed and being told to stand down, allowing lawless acts to happen every night after dark, holding no one accountable. A 77 year old man was trying to help a woman who was punched and then shoved off her bike was pummeled by a group of 18 men. Even though it was caught on tape by multiple witnesses, no arrests have been made and the man is in critical condition. No one came to his aid.

Those creating the mayhem are going uncharged and unpunished. Meanwhile, President Trump sent troops but Governor Newsom and Mayor Garcetti refuse to use the troops, saying everything is fine.

Mainstream media is reporting on “peaceful protests” but that is not what actually happened. What’s happening is the protests are peaceful until about 6pm then they go violent. Looting, burning, damaging our towns is accepted as the norm. Media refuses to show you what’s happening.

Garcetti’s past lectures to stay home and stay safe have now faded and he is taking a knee in front of his Larchmont Mansion with Black Lives Matter’s protesters who are urging him to “DEFUND POLICE”. He was not wearing a mask on June 2, 2020 during this appearance.

Yet, two hours later, while the Los Angeles Times is printing a photo with a mask on, that was either photo-shopped or staged, Garcetti is at a press conference promising to allocate the funds for the police to go to Black supported agencies.