U.S. Customs and Border Protection (CBP) and Immigration and Customs Enforcement (ICE) agents have indicated on their websites apprehensions from March of 172,000 migrants entering the U.S. illegally with nearly 19,000 of these unaccompanied children.

Texas Senator Ted Cruz, condemned the decision of the Biden administration for prohibiting press coverage after bringing 14 members of GOP to the border.

“It is not enough for members of the Senate to see what is happening—the American people must-see,” Cruz wrote in a letter to the White House. “That is why I requested that members of the media be allowed to join us. But your administration clearly and emphatically refused to offer press access. This is outrageous and hypocritical.”

Then: Democrats accused me of lying about suspected terrorists crossing our southern border.

Democrats’ disastrous policies created this crisis—and they know it. pic.twitter.com/TrL2WCTlXk

Between February 27 and March 22, CBP Air and Marine operations and their partners seized four tons of cocaine in the Eastern Pacific. 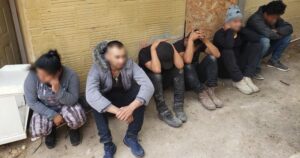 CBP agents reported the apprehension of Jose Ismael Barcenas-Espinoza, 55, convicted in 2010 for assault with a deadly weapon and sentenced to 12 years in prison. “Barcenas-Espinoza was most recently removed from the United States in 2014.”

On April 5, USCBP reported the arrest of two Yemen men on the FBI’s Terrorism Watch List. All news reports regarding terrorists entering the U.S. illegally have been taken off social media.

Chief Patrol Agent Aaron Heitke reported two abandoned children ages 5 and 6 years old. “It is unconscionable that anyone would abandon these small children and those responsible for smuggling events like this will be aggressively prosecuted,” said Heitke in a press release. “Thankfully, our agents were able to quickly rescue these siblings.”

CBP arrested Macario Mora, who was previously convicted of raping an individual under the age of 18. He was sentenced to 9 years in prison, and removed from the U.S. He now faces up to 20 years in prison.

U.S. Border Patrol (USBP) arrested a Mexican national on April 2, who had been convicted for murder in 2003. More details of criminal behavior by the CBP may be found at their website.