UNITED STATES—On January 13, close to 200 Honduran immigrants traveled to the city of San Pedro Sula, Guatemala where they are to meet with other members, approximately 7,000 to the US border after President Elect Joe Biden announced that he would be easing border crossing restrictions if he became President.

Approximately, 3,000 police officers in the village of Vado Hondo, about 30 miles from the Guatemalan-Honduras border used tear gas and sticks to deter the crowd.

“Guatemala’s message is loud and clear: These types of illegal mas movements will not be accepted, that’s why we are working together with neighboring nations to address this as a regional issue,” the Guatemalan President’s office proclaimed.

President Alejandro Giammattei is a conservative who vowed to end poverty and violence that have sent Guatemalans fleeing to the U.S. 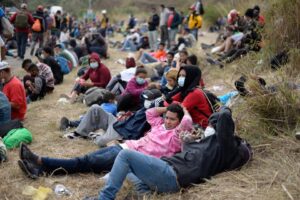 According to reports, approximately 75 police officers dressed in riot gear stopped the migrants from breaking the local pandemic-related curfew.

Officers checked the traveler’s identification and documentation to ensure they were not traveling with children not theirs.

One migrant caravan was blocked by security forces in Chiquimula on Sunday. Chiquimula is both the capitol and the municipal seat of surrounding areas is approximately 108 miles outside of Guatemala City. Travel restrictions are in place due to COVID-19 for those seeking to come into the U.S.

The US-Mexico land border remains closed to all but, “essential crossings,” until at least February 21.

The land border restrictions introduced on March 21, 2020, due to COVID-19 has been extended multiple times. The land border between the United States and Mexico will remain restricted to ‘essential crossings’ only until at least February 21.  The complete list may be found on the Mexperience.com.

Air travel between the U.S. and Mexico remains unrestricted. News of the extension for another month was confirmed by the U.S. Department of Homeland Security.

A representative from the Biden team issued the following statement:

“The situation at the border isn’t going to be transformed overnight.”

“The national emergency declared on February 15, 2019, and the measures adopted on that date to respond to that emergency must continue in effect beyond February 15, 2021. Therefore, in accordance with section 202(d) of the National Emergencies Act (50 U.S.C. 1622(d)), I am continuing for 1 year the national emergency declared in Proclamation 9844 concerning the southern border of the United States,” President Trump declared.