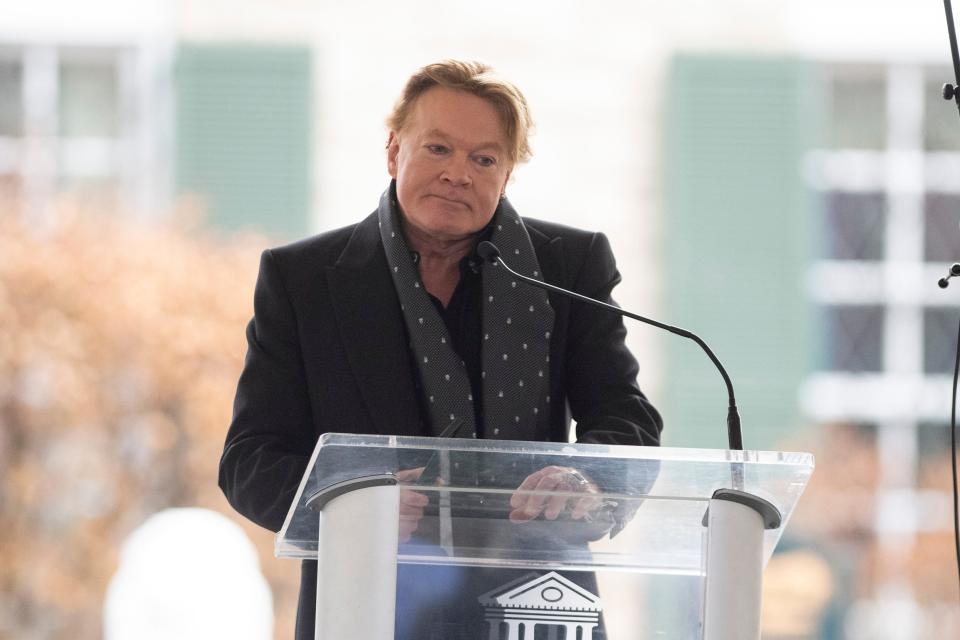 HOLLYWOOD—On Sunday, January 22, a public memorial service was held for Lisa Marie Presley. The only child of Elvis Presley died on January 12, hours after being taken to the hospital. She was buried at Graceland next to her son Benjamin Keough, who died in 2020. The service was absolutely heartbreaking, emotional and touching. It was live-streamed which many fans were able to watch all over the world.

Artists such as Alanis Morisette and Guns N’ Roses front-man Axl Rose performed as they joined her children as well as others including Sarah Ferguson the Duchess of York and the former mayor of Memphis, in paying respects to Lisa Marie. Crowds of mourners were pictured holding up pictures of Lisa Marie after members of the public were invited to attend the service.

Her mom, Priscilla Presley, thanked everyone for coming to honor her daughter as she stood on the stage on the front lawn of the estate. Priscilla read a poem written by her granddaughter-which read:

“Mama was my icon, my role model, my superhero, and much more ways than one.”

A poem by Lisa’s daughter Riley was read by her husband that stated:

“I hope I can love my daughter the way you loved me. The way you love my brother and my sisters. Thank you for giving me strength, my heart, my empathy, my courage, my sense of humor.”

“My late mother-in-law used to say that nothing can be said, can begin to take away the anguish and the pain of these moments, because grief is the price we pay for love, and how right she was.”

The service featured a number of beautiful musical tributes, including Alanis Morissette, who delivered an emotional rendition of her song “Rest.” Axl Rose who was so very emotional, and humbled by being invited, performed one of my favorite songs “November Rain,” he played piano so beautifully, made me cry. He also made a speech before performing. “I didn’t really know I was going to speak or anything,” Axl told the media. “I still fell like, I don’t know, that I deserve to be here, but I wanted to try to do right by her and her family and her fans. So it meant a lot, but I was pretty nervous and emotional up there.” During his emotional speech, Axl continued, “I never in a million years imagined singing here, especially under these circumstances. This is truly devasting.”

He also noted the importance of Baz Luhrmann’s movie, “Elvis” starring Austin Butler, who attended the ceremony with his girlfriend Kala Gerber, and his sister, Ashley Butler. She was very proud of the Elvis movie and felt it portrayed her father and the care that was put into the film by those involved. He also spoke of her mission to help others even during their time of grief, following the death of her son Benjamin.

He concluded, “We’re gathered here today to pay our respects to Lisa and her family and to share memories, console one another to the degree that we’re able and though under such difficult, heartbreaking and somber circumstances. Also to celebrate a friend, a loved one, a beautiful soul, and a cherished and deeply missed member. Lisa is loved and missed by many and will continue to be loved and missed by all those whose lives she touched. Thank You.”

So touching. Billy Corgan sang “To Sheila” by The Smashing Pumpkins. The Blackwood Brothers Quartet, who performed at her father’s funeral in 1977 with different members, then sang the gospel song “How Great Thou Art,” followed by “Sweet, Sweet Spirit.” Elvis Presley and other members of the Presley family are also buried at Graceland.