UNITED STATES—Heavenly bamboo, or simply ‘nandina,’ is one of those many plants that almost never performs like it should. The intricately lacy foliage is so appealing while plants are young, and changes color with the seasons. The red berries can be comparable to those of holly. Unfortunately, healthy plants grow, and then ultimately get shorn into globs of disfigured leaves and stems.

The same abuse afflicts Oregon grape (mahonia), mock orange (philadelphus), forsythia, lilac, abelia and all sorts of shrubby plants that really should be pruned with more discretion. Their deteriorating older stems should be pruned to the ground as new stems grow up from the roots to replace them. It is actually not as complicated as it seems.

This pruning process, known as ‘alternating canes,’ prunes the plants from below. It is a standard pruning technique for maximizing production of blackberries, raspberries and elderberries. It is similar to grooming old stalks from bamboo and giant reed, even if it does not prevent them from spreading laterally.

The deteriorating older stems, or ‘canes’, are easy to distinguish from newer growth. Old canes of Heavenly bamboo and Oregon grape become heavy on top, and flop away from the rest of the foliage. Old canes of mock orange and lilac get gnarled and less prolific with bloom. Aging abelia and forsythia canes become thickets of crowded twigs.

The newer stems are likely a bit lower, but are not so overgrown. Since the foliage is not so crowded, it is displayed on the stems better. Their blooms or berries are more abundant. By the time new growth becomes old growth, there will be more newer growth right below it. In fact, the regular removal of aging canes stimulates growth of new canes.

This is the time to prune Heavenly bamboo and Oregon grape, just because the oldest foliage is as bad as it will get after the warmth of summer. Mock orange, forsythia and lilac should get pruned while dormant through winter, but are commonly pruned just after they finish bloom early in spring. Abelia should probably wait until spring because new growth can look sad through winter. 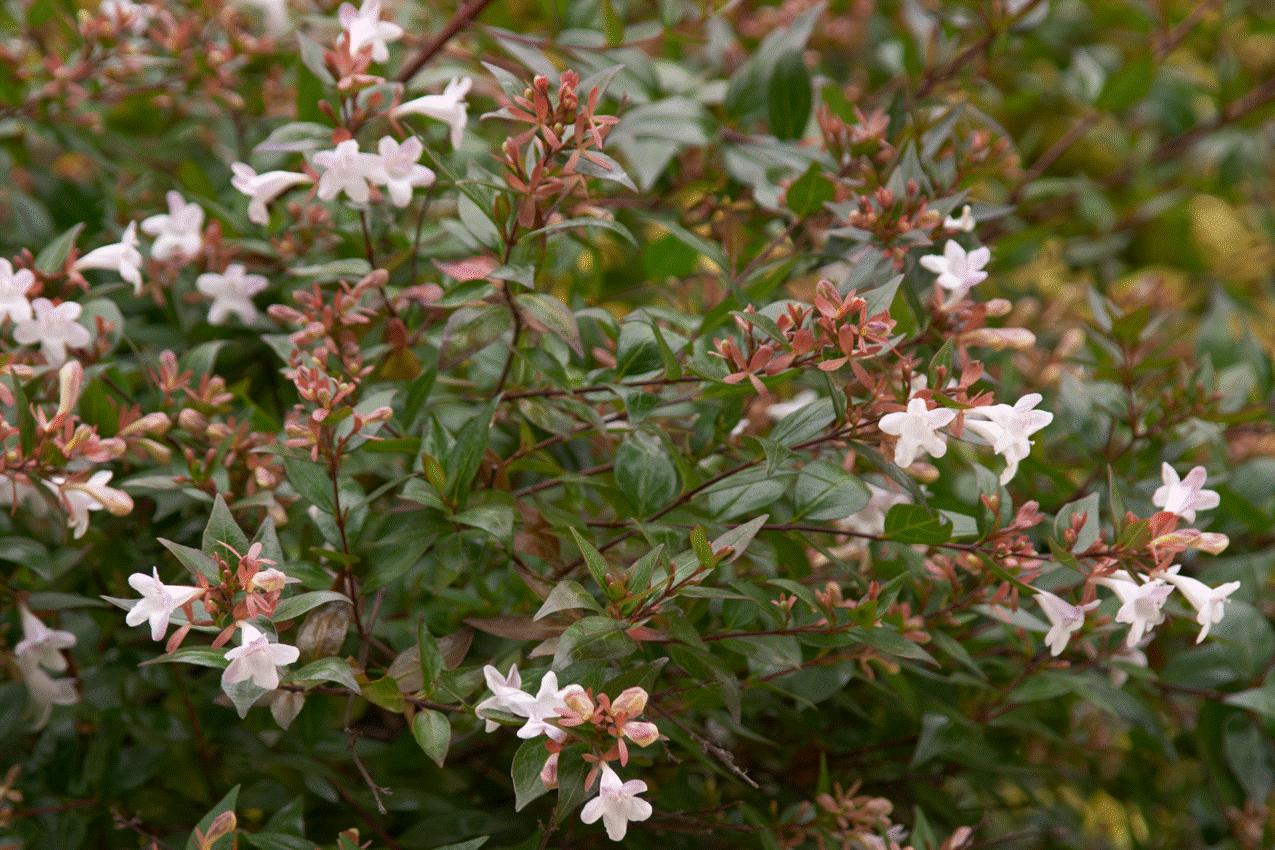 With indiscriminate pruning, glossy abelia, Abelia X grandiflora, will never develop its natural form, with elegantly long and thin stems that arch gracefully outward. Sadly, almost all get shorn into tight shrubbery or hedges that rarely bloom. If only old stems get selectively pruned out as they get replaced by fresh new stems, mature shrubs can get 8 feet tall and 12 feet wide.

Against their bronzy green foliage, the tiny pale pink flowers that bloom all summer have a rustic appeal. In abundance, they can be slightly fragrant. The tiny leaves are not much more than an inch long. Vigorous young canes that shoot nearly straight out from the roots slowly bend from the weight of their bloom and foliage as they mature.

Partial shade is not a problem for glossy abelia, but will inhibit bloom somewhat. Young plants want to be watered regularly. Old plants are not nearly so demanding, and can survive with notably less water. If alternating canes is too much work to restore old and neglected plants, all stems can be cut back to the ground at the end of winter. New growth develops quickly.

Bad Dreams Are A Trigger Of What?

Which Tools Can Help Grow Your Business On Social Media?