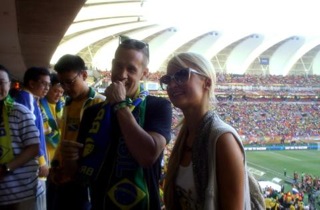 HOLLYWOOD—Paris Hilton and a friend were arrested on Friday, July 2, while watching the Brazil-Netherlands World Cup Game at the Nelson Mandela Bay Stadium. They were detained outside of the stadium under suspicion of smoking marijuana, and they were charged with one count each of drug possession.

Almost as soon as rumors of the arrest had surfaced on the Internet, reports that the charges against Hilton had been dropped were also circulating.  In a statement issued by Hilton’s publicist, the incident was called a “misunderstanding.”

Jennifer Rovero, a former Playboy Playmate and friend of Paris Hilton, pleaded guilty to the charge of possession.  Her admittance of guilt was coupled with a 1,000 rand fine, which equals $130 or a 30-day stay in prison.  Rovero paid the fine and will have to leave South Africa within two weeks.

On her Twitter page, Hilton addressed the situation, “”¦ it was absolutely ridiculous what I was put through for nothing. But I’m used to being a scapegoat.” Prior to this, Hilton stayed out of the spotlight of scandal since her 2007 arrest for violating the conditions of her DUI probation.

In the aftermath of her arrest and subsequent release, Hilton continues her South African vacation.