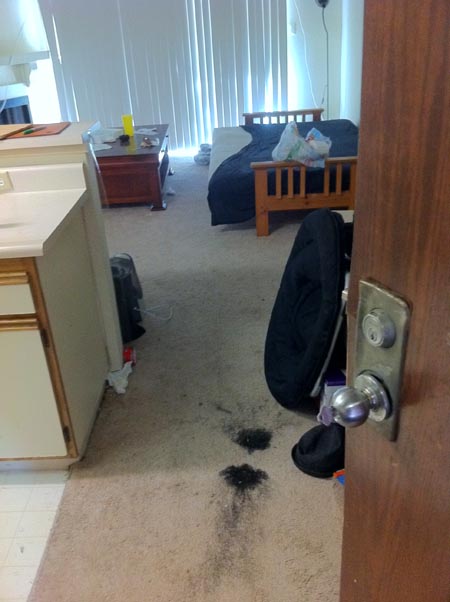 WESTWOOD—UCLA campus police arrested six suspects in connection to the sale of illegal drugs from an apartment building. The incident occurred on Wednesday, September 29, shortly after 6 a.m.  Upon serving the search warrant, police found weapons, ammunition and various drugs including prescription pills, marijuana, heroin and cocaine at the apartment located on512 Veteran Ave.

The suspects taken into custody included Phillipp Bonushkin, 21; Daniel Hawkins, 27; Christopher Farrer, 22; Anders Kusion, 23; Rafay Choundhury, 21; also apprehended by authorities was 22-year-old Abdul Khan in connection to an armed robbery of two UCLA students on Tuesday, September 28, at 10919 Strathmore Ave.  During the robbery, a gun and knife were used to threaten the victims.

Canyon News spoke to Phil Hampton, Assistant Director of UCLA Media Relations and Public Outreach via e-mail about the incident.  When asked if police believe other suspects are connected to the illegal sale of drugs near campus he replied, “A second person is being sought in connection with the armed robbery.  Police continue to investigate the drug case, as well.”  He indicated that an iPod touch and cash, a total estimated value of $200, was stolen from the victims during the robbery.  “One victim was struck in the face.  No medical treatment was required,” said Hampton.

A UCLA press release stated that one of the suspects arrested, Phillip Bonushkin is a senior at UCLA who is majoring in applied mathematics. A witness who didn’t want their name disclosed spoke to Canyon News about the incident. The witness said that the event occurred at around 6:05 a.m. or 6:10 a.m. on Wednesday with a scuffle or confrontation between the suspects and police.

“I woke up my roommate to indicate what was going on and there was a loud bang.  I thought it was a gunshot, but it was later confirmed to be a loud flash bang, which is a device that sounds like a grenade, with a bright light,” stated the source.  The source added that the suspects were kept on the side of the wall in the building for one hour.  “Two to three hours later, police were still collecting evidence and later seized the suspects’ vehicles,” said the witness.  The eyewitness specified that two apartments were raided by police that day.  One had the door broken down and at the other apartment, police knocked on the door.

Bail for Bonushkin, Hawkins, Farrer, Kusion and Choundhury has been set at $30,000.  Khan is currently being held at the North County Correctional Facility.  His bail has been set at $630,000.  He is expected to appear back in court on October 18 at 8:30 a.m.