PORTLAND, OR—President Donald Trump supporter, Jay Bishop was murdered on August 29. After more than 100 days of anarchy threatening life of anyone who disagrees with Black Lives Matter and Antifa, Mayor Ted Wheeler continues to reject President Trump’s offer to help. You have to be delusional to think this is a peaceful movement over racial equality.

On August 30, Wheeler arranged a press conference to incite further rage, boost his ego, make excuses and blame our president for his own failure to govern, while attempting to garner support and votes.

For months, the residents of Portland stayed home and silent, tolerating and avoiding the violence while democratic politicians portrayed the anarchy as peaceful protests and encouraged it, often joining them. People, who are rightfully fed up with this loud mob devastating a once peaceful town, took a stand. A caravan of Trump supporters came to counter protest and were not welcomed by the anarchists as well as the government.

Demonstrators attempted to attack, halt and bully the Trump caravan.

Once announced on Twitter that Trump supporters were on their way, BLM anarchists responded with sometimes direct and other times subliminal messages that they would not be received well.

They held to their threat. 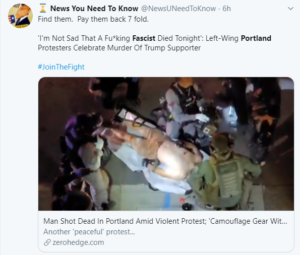 They killed Jay Bishop, a conservative, pro-life, pro-police, pro-Trump supporter. As he laid on the ground taking his last breath, a Blue Lives Matter emblem on his pocket was most noticeable.

It took minutes for word to travel on social media.

Unlike all those on the right who are censored, Twitter did not bother to censor their celebration of a death, calling it justified because he was a Trump supporter.

The same president he and the other idiot Democrats blame for the spread of COVID-19 (yes there were only 10,000 deaths in the US) to Trump rallies, joined protests in Portland. He is out protesting with Black Lives Matter and Antifa, while people’s lives are being lost.

Trump has continuously offered help to restore law and order while anarchists are destroying the beautiful city of Portland.

As Wheeler is throwing baseless attacks at our president, he says he is ready to reach across the aisle to work. Really? Why not start off on a different foot. Why are you lying, attacking, getting political then saying you want to work together…but we all know you will not work with Trump because your motivation is to unseat him, therefore you do all you can to allow your town to destruct to have something to blame Trump for and your ignorant followers who can’t see the truth if it smacked them in the head.

He went on to blame the country for the deaths of people of color that have become famous in the last three months, such as Breonna Taylor, Jacob Blake and George Floyd.

We all admit George Floyd was just out of control. Not one person condoned that. You do not need 3 months of riots to change something that is already not an issue. We have good and bad people. It wasn’t racial in any regard. It was a man taking another man’s life. Race was not involved.

Breonna Taylor was killed after she participated in drug trafficking with her previous and current boyfriend. Police had a legitimate warrant. They knocked, she and her boyfriend were fully aware who was at the door. They shot through a closed door at police. Police returned fire. When you play stupid games, you win stupid prizes.

Jacob Blake had an arrest warrant, fought police (for the second time). He had a knife and he went to his car to get a gun. The police struggled with him until the police officer fired as he feared for his life.

This is what we are rioting over? It’s based on lies by the left leaning Marxist group that is trying to unseat Trump. Make no mistake, these are not racially motivated crimes. These are situations being used to exploit a sensitive and emotional cause based on untruths.

Wheeler stands up in front of the nation, blaming Trump, saying he is doing everything he can. Violence is taking over Portland, as you can see in the video above, just another assault.

Really? You are doing everything you can? Then why are you not allowing the police to get control of the anarchists? Why are you encouraging them to create mayhem?

Wheeler is handcuffing his police because that is what he is instructed to do from his funders, Black Lives Matter.

To stop this, it takes law and order. Mayor Wheeler is delusional and so are his blind followers. This is up to the mayor and governor to control, not the president.

How can Wheeler blame President Trump for this anarchy when this lawlessness is only taking place in Democratic areas?

Why is Wheeler politicizing his constituents’ safety and lives for your 2020 win?

It is not President Trump. President Trump is not spreading hate. He did not mock a disabled reporter. Pull yourself away from the lying Democratic talking points. 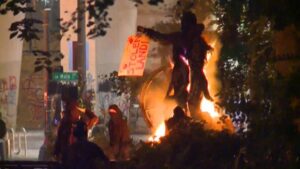 Why is Portland allowing assaults, violence, destruction and even deaths to happen under your watch while you are refusing much needed help from President Trump?

Why do Democratic politicians, including Wheeler, continue to lie about the seriousness of these riots?

Why is Wheeler making excuses when innocent people are tired of the forced anarchy, fascism and control happening by Antifa and Black Lives Matter?

You are too busy raising money and creating a politically driven Black lives only COVID fund you created while your city self-destructs.

How much money did Black Lives Matter pay Wheeler to uphold their political agenda?

Mayor Ted Wheeler, you are the problem. President Trump is the solution. I did not vote for him in 2016, but your actions, along with those of your colleagues have encouraged me to vote 2020 for Trump as well as anyone else on the red ticket.

Everyone should take a good long hard non-emotional look at what is going on. This is all politics. How can you blame the president for a mayor that is rejecting help and then crying it is the president’s fault.

If you vote blue in 2020, you are voting for anarchy, fascism, socialism and chaos. Try to create a dream, run a business and have freedom to speak or to do what you want. It will be gone.

There is one way to vote in 2020. Get these idiots out of office.