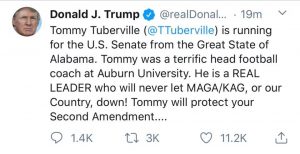 Sessions occupied the Senate seat for 20 years prior to becoming Attorney General and will run against Tuberville in a run-off on March 31. The winner of that race will face Jones on November 3.

Sessions recused himself as Attorney General after President Trump was under investigation for possible Russian interference in the 2016 Presidential election.
At a press conference in March 2017, Sessions made the following announcement.

“I have now decided to recuse myself from any existing or future investigations of any matter relating in any way to the campaign for President of the United States,” Sessions stated. “This announcement should not be interpreted as confirmation of the existence of any investigation or suggestive of the scope of any such investigation,” said Sessions.

Jones assumed the office on January 3, 2018. His term is up on January 3, 2021. He is a supporter of LGBTQ and pro-abortion reproductive rights, and defeated Chief Justice Roy Moore in the U.S. special election in Alabama on December 12, 2017, and six other candidates on August 15, 2017. He was appointed U.S. Attorney for the Northern District of Alabama by former President Bill Clinton.

Jones was under the microscope during the impeachment trial, where he was viewed as a possible swing vote after running for re-election in a predominantly conservative state that  supported Donald Trump in 2016.