UNITED STATES—Private planes funded by Glenn Beck, the Nazarene Fund led by Tim Ballard with Operation Underground Railroad, and other nonprofit organizations rescued thousands of Afghan Christians, women, children and Americans who had been left in Afghanistan are currently grounded. This includes six private 737 planes charted by  Beck.

According to reports, the planes are being held hostage by the Taliban. Beck says they are being grounded by the Biden administration with no help from the U.S. State Department. 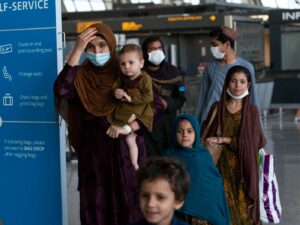 He chartered several private jets at the reported cost of $750,000 per plane.

As of August 20, Ballard and his team, as well as David Barton and Beck went into Afghanistan on private evacuation rescue missions. In 36 hours, they raised $19 million for the  mission.

Beck reported there were three countries, willing to help get rescue people from Afghanistan by the August 31, deadline issued by the Biden administration.

“It’s pretty unbelievable, we thought we had until the end of the week. The Biden Administration said that and now they’re backing it down. It looks like it’s really quicker than they said. You really wonder if anyone is in charge because nobody is keeping their word in anything they are saying,” David Barton, the founder of Wallbuilders stated.

This was done through his non-profit charity, The Nazarene Fund. Beck stated, “not just the Nazarene fund, but many, many others.”

“Please please pray for all of the people that are going to be left behind. Pray for those people. Pray for those Americans that now must wonder, did I even matter to my country,” said Beck?

On August 25, Beck reported on YouTube that women, children, and Christians were  left in Afghanistan, when the Biden Administration withdrew U.S. troops. He called the U.S. State Department the “Biggest Obstacle” in rescuing those left behind.

He was reporting from a nearby country that he did not disclose telling his viewers  there are other friendly countries willing to help move people out. According to Beck, the U.S. State Department would not allow it.