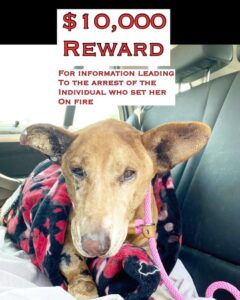 A volunteer from A Purposeful Rescue stated on social media that she found the dog chained to a fence and badly burned. Witnesses told reporters they reported the suspect for animal cruelty, for burning animals in the past.

Smith was seen walking into the park with his dog named Hennessey which he had since a puppy. He left the park without the dog.

Graphic video details the horrors the dog endured. Volunteers relayed that the dog was responding to them with tail wags and expected her to survive, but the animal did not.

According to reports, his ex-girlfriend, Serena Prentice has a restraining order against Smith. Prentice, who has a child with the suspect, told reporters she left with her child when Smith started exhibiting violent behavior toward her, and the dog. She said the dog was a family pet.

Prentice claimed Smith posted videos on social media of catching birds on fire and shooting at dogs through fences.

Man charged with setting dog on fire pleaded not guilty today. He is due back in court on 9/22. https://t.co/8lZmEEurF3 #LADAOffice

A Class F Felony can be punishable by a fine of no more than $20,000, a 3-year prison sentence with it being more severe if the cruelty ended in the death of the animal.