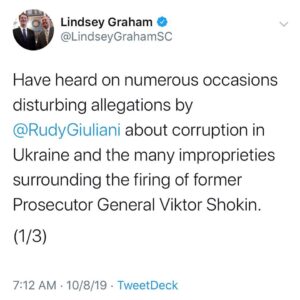 On Sunday, December 14, Graham invited Giuliani to inform the committee of the findings of his investigation, not as part of the impeachment, but beforehand so the GOP Senators have his information prior to “grilling the witnesses.”

Giuliani has spoken publicly about spending time in Ukraine leading an investigation to uncover possible corruption and ties  between Ukraine and the Biden family.

Giuliani announced on December 14 that he is “preparing a report on Joe and Hunter Biden’s corruption in Ukraine. On Sunday, December 15, Giuliani tweeted:

“In my next thread of Tweets, I will be sharing some of the evidence I have garnered through hundreds of hours of research.  Turn notifications on and stay tuned.”

According to reports, the findings of Giuliani include accusations of stealing, money laundering, details on the Bidens and former Ambassador to Ukraine Marie Yavonovich.

Real Money Gambling: 5 Things You Have To Know