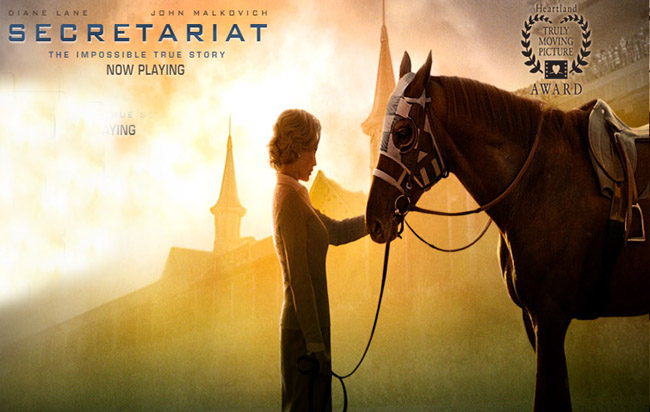 HOLLYWOOD—“Secretariat” is a story moviegoers can follow, even if they haven’t had the exhilarating experience of witnessing a horse race. This film focuses less on the rare chances of this horse being considered a candidate for a great racing future, as the writers chose to focus on the woman who put all doubts aside to prove that a horse on her farm could be a historical find, which would become as much a part of the American experience as “Seabiscuit” had previously.

Sometimes novels don’t translate well on the big screen; however, with this amazing cast of actors, it does. From William Nack’s novel “Secretariat: The Making of a Champion,” director Randall Wallace tells the true story of Penny Chenery, played by the talented Diane Lane, who challenges what everyone believes about women in the 1970s and also horses, while proving that she knows a champion when she sees one.

Lane is the best thing about this film. She’s exciting, spunky and most of all, makes the viewer believe that she can do anything and has full faith and belief in Secretariat. Lane is often challenged on screen by John Malkovich, who portrays Lucien Laurin and also does some of her best work with Dylan Walsh, as Jack Tweedy. The film work of actor Nelsan Ellis, who portrays Lafayette on HBO’s “True Blood,” will also surprise many of his fans. This role was proof he has all that it takes to do other things than play an over-the-top drag queen.

Kevin Connolly, as Bill Nack, is absolutely superb. He throws away all of his mannerisms and gestures as the Hollywood talent manager on “Entourage” and becomes a down home boy, who also believes in the horse that has become synonymous with horseracing as we know it today.

Scott Glenn and James Cromwell are also extraordinary in their roles. I found myself rooting for Secretariat during the exciting and well-filmed horse racing scenes. Initially, I was hesitant to go to see this film, as I’m not a sports fan, but left the screening feeling excited and hopeful about life, and isn’t that what a movie about an animal is supposed to do for us?

“Secretariat” gets Three of Five Stars from this reviewer. The film opened in theaters on Wednesday, October 6.

Suspects Arrested For Looting And Burglary