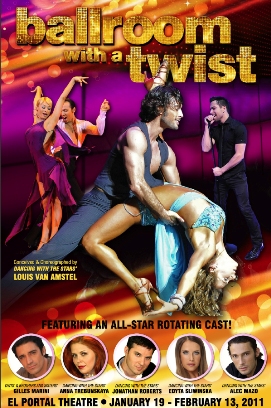 HOLLYWOOD—Can’t get enough of your “Dancing With the Stars”? “Ballroom With A Twist” is the only show that offers fans the opportunity to see the stars up close and in person. Gilles Marini and Jane Seymour will serve as hosts for this highly anticipated production of “Ballroom with a Twist,” a brilliant new dance production conceived and choreographed by EmmyÂ® Award nominated Louis van Amstel, a five-time “Dancing With the Stars” pro.

“Ballroom” boasts an amazing ensemble including dancers from “High School Musical – The Movie,” “Dance Your Ass Off” and “Dancing With The Stars” dance pros such as Edyta Sliwinska, Alec Mazo, Jonathan Roberts and Anna Trebunskaya. Dancers from “So You Think You Can Dance” season five will also be included such as Randi Lynn Evans and Johnathan Platero, as well as this year’s all star Ade Obayomi in addition to “American Idol” finalists from season seven, David Hernandez, and season six, Gina Glocksen, who provide exciting live vocals.

This ground-breaking show pushes the boundaries of ballroom dance, infusing it with energy and the intensity of the classic ballroom and the latest authentic, hip-hop and Broadway styles. “Ballroom With A Twist” is an extravagant evening of entertainment for the entire family, highlighted by stunning costumes, magnificent music and breathtaking performances. “The costumes are pretty much what you see on ”˜Dancing With the Stars,’” says van Amstel. “They’re young, they’re hot, they’re in the best shape of their lives.” Van Amstel knows how to get people to move but wants to move the audience. “What I want people to take home with them is that they’re being touched,” he says. “That they’re being moved by something beautiful. We also have a little surprise for the audience. But I’m not going to tell you.” To be continued!

Gilles Marini is perhaps best known as Luc Laurent on ABC’s hit family drama, “Brothers and Sisters” as well as his second-place finish on season eight of “Dancing with the Stars.” Marini found himself in the international spotlight after appearing in what some have called the second greatest shower scene in film history in 2008’s “Sex and the City: The Movie.” While recent film credits include “One and the Other” (L’Une et L’Autre) and “The Boys & Girls Guide to Getting Down,” television audiences have seen him in primetime series such as “Nip/Tuck,” “Ugly Betty,” “Criminal Minds” and “Windfall” as well as the daytime dramas “The Bold and the Beautiful” and “Passions.” Marini was named one of People Magazine’s top ten Sexiest Men Alive for 2009.

Jane Seymour is best known for her title role in “Dr. Quinn Medicine Woman,” the multiple EmmyÂ® and Golden GlobeÂ® winner has proven her talents in virtually all media, the Broadway stage, motion pictures and television. In addition to a recent 2005 appearance on the EmmyÂ® nominated program “Dancing with the Stars”, Seymour starred in the highly rated “Dear Prudence” television movie for the Hallmark Channel. In 2005, she joined Owen Wilson and Vince Vaughn in the Newline Cinema feature film “The Wedding Crashers” playing the sexually charged wife of Christopher Walken. She is also a recipient of the Officer of the British Empire (OBE) in the year 2000, which was bestowed upon her by Her Majesty Queen Elizabeth II at Buckingham Palace.

WHERE: The El Portal Theatre, 5269 Lankershim Boulevard, in North Hollywood