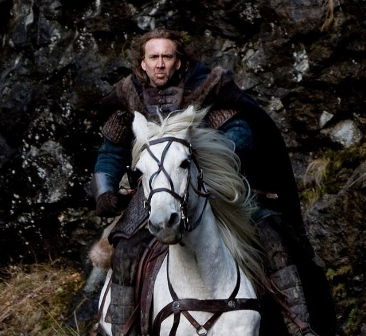 HOLLYWOOD—Nicolas Cage is in desperate need of a hit film. January is normally not the month for hit films since the Oscars and Golden GlobeÂ® Awards are just weeks away. This will be no exception, but that doesn’t mean that it wasn’t an engaging film, which I enjoyed. This tale by director Dominic Sena and writer Bragi F. Schut did manage to keep my attention during its almost two-hour-long run. Cage is very good in the film, and it is surely not surprising that character actor Ron Perlman is excellent in his role. He’s always a solid performer.

Momentum Pictures states about their film, “A story of a 14th century crusader returns to a homeland devastated by the black plague. A beleaguered church, deeming sorcery the culprit of the plague, commands the two knights to transport an accused witch to a remote abbey, where monks will perform a ritual in hopes of ending the pestilence. A priest, a grieving knight, a disgraced itinerant and a headstrong youth who can only dream of becoming a knight join a mission troubled by mythically hostile wilderness and fierce contention over the fate of the girl.” That’s where the action takes off, but as the film goes on, a terrible secret discovery causes jeopardy to the pledge Cage’s knight made earlier on.

Claire Foy is the actress who portrays the girl in question, and she is excellent in the role of the alleged falsely accused, who must fight for her life and is as women in that era would be, forced to prove her case to her captors before they hand her over to the authorities. Steeped in some historical facts and superstition, “Season Of The Witch” brings a period piece to the theaters filled with fantasy and lots of action.

Rounding out an excellent cast are, Stephen Campbell Moore, Stephen Graham and Ulrich Thomsen. It’s a cast and a subject that will most likely appear to European audiences much more than Americans, who seem fixated on special effects and comedy more than drama. However, it’s a film worth seeing, if you are a fan of Nicholas Cage or Ron Perlman. The two men show great dramatic chops and the writing is good as well. It’s not an excellent film that will fall under the category of my all time classics; however, it’s a fun, pulse-pounding fantastical story that manages to keep my attention and that is most likely the goal of this director.

The film receives Three out of Five Stars from This reviewer. “Season Of The Witch” opens around the nation on Friday, January 7.